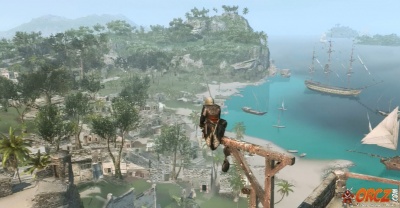 Nassau is one of the major port cities in Assassin's Creed IV Black Flag.

It is the second major port the player arrives at, after Havana

Originally founded as another Charles-Towne, the dty was renamed Nassau in honor of King Wiliam III of the house of Orange-Nassau. Thiscity has a particularly colorful past: In 1706 the city's officially appointed Governor skipped town, thus severing the Crown's direct control over the Bahamas

The islands languished for almost a decade in the hands of British citizens with Little or no interest in Statesmanship. By 1713, the entire region had become a haven for pirates and it was in this period that Benjamin Homigold declared Nassau to be a pirate republic He proclaimed himself governor and thereafter every pirate of any sense and reputation used Nassau as a base of operation, transforming this small city of barely 1000 residence into "a nest of infamous bastards," according to the Governor of Bermuda