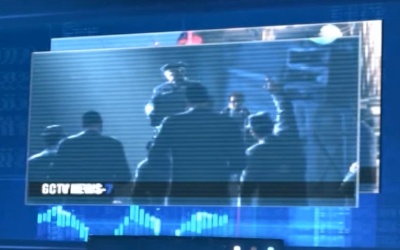 Commissioner Loeb, on GCTV News, briefing reporters on the capture of Calendar Man in a press conference at the beginning of Batman:AO

Commissioner Loeb (Gillian B. Loeb) is the Police Commissioner of the Gotham City Police Department at the beginning of Batman: Arkham Origins

Shortly later, Commissioner Loeb is taken captive during when Black Mask organizes a breakout from Blackgate Prison, and is subsequently killed.

Later in the game, when Batman is in the GCPD Building, you can hear that donations are being collected to help Loeb's family.

Alleged to have connections to Gotham's major crime families

As much politician as policeman, Gillian Loeb is a blight on Gotham. He runs the city like a criminal kingpin and the police under his command are used as his personal enforcers. He is particularly close with Lieutenant Branden and his shoot-first SWAT teams.

Under Loeb's watch, the city has experienced relative peace between the various crime families. This peace that has allowed them to exploit and extort the citizens who live and work on their turf. As long as Loeb remains in power, so too will the kingpins.