Blade and Soul: Soup Her Man 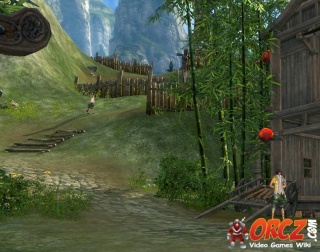 "Soup Her Man" is the name of a side quest that you pick up from Wubaiku at the Bamboo Village in BnS. This quest involves delivering her famous crab soup to Janghun.

Soup Her Man is a Side Quest in Blade & Soul.

You get it from Wubaiku who can be found standing in the area between Dochun's House and the Mayor's House.