Borderlands 2 has a lot of hidden secrets, secret messages, references to popular culture, and other types of Easter Eggs.

This is the list of Easter Eggs in Borderlands 2

References to other games[edit] 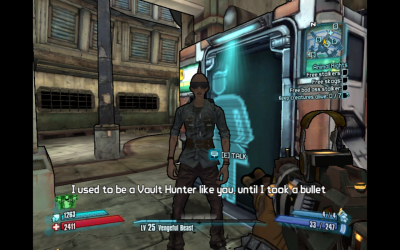 Screenshot of the Sanctuary citizen who says the meme

Donkey Mong - A Bullymong named after the enemy from Donkey Kong, it even throws barrels at you. There is also the achievement you get for killing it, "Definitely An Italian Plumber", which is a reference to Mario.

derp Nukem - A Rocket Launcher with the Duke Nukem logo on it, causes a nuclear blast visual effect.

References to movies and comics[edit]

Rakkman - A reference to Batman. Killed his parents, lives in a The Rakk Cave, and comes complete with a Rakkarang, Smoke Bomb, and a colony of Rakks.

King Mong - A reference to the classic "King Kong" movie.

There is a pistol in a box called Gwen's Head

In Dr. Zed's Clinic QR Code - It says: "Thank you so much for playing our game, now I'm rich with love AND money! !!Nick Wilson!! Ditto!!". Nick Wilson is a Geabox Software Developer.

Impaler: Red text says "Vlad would be proud.", a reference to Vlad the Impaler

Fabled Tortoise: Red text says "Win by a hare", a reference to the famous fable, The Tortoise and the Hare.