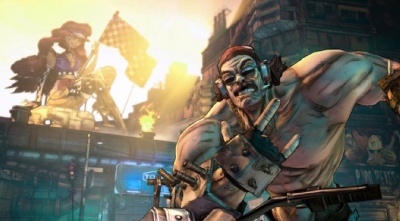 Mr. Torgue, a new NPC from the Mister Torgue's Campaign of Carnage DLC in Borderlands 2.

Mr. Torgue is an NPC in Borderlands 2

He is part of the Mister Torgue's Campaign of Carnage DLC

Mr. Torgue is the mouthpiece for the Torgue Industries.

Torgue is all about explosions and muscle cars

"I Probably shoulda set you up with a sponsor beforehand but I am F*CKIN' DISORGANIZED AS SH*T and was busy suplexing a shark wearing a bola tie when I should have been setting up sponsors. You may ask, 'Who was wearing the bola tie, you or the shark?' Answer: 'Yes' "

"You may have noticed that everyone here is trying to kill you, Torgue personnel included. You're welcome, I didn't want you to get bored so I was like 'F*ck it, give everybody guns!' We've lost like half our work force in three days, but who gives a F*CK"

On Piston: "IS IT JUST ME OR DOES IT SEEM LIKE HE'S GONNA BETRAY THE F*CK OUTTA YOU?"