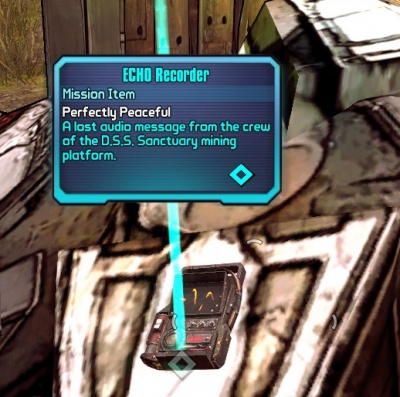 Perfectly Peaceful ECHO Recorder is an item found in Borderlands 2. These detail the conversations between Security Officer Elyse Booth and Harchek

A lost audio message from the crew of the D.S.S. Sanctuary mining platform.

Security Officer Elyse Booth: Missus Harchek! Today a miner found a crystal formation near the alien ruins, but it started... moving. The ... creature appears perfectly peaceful; I don't think it's ever seen a person before-- Blue, not now! Here - go play with my hat. Get -- there you go, Blue! We're calling it Blue cause of the color its uh -- yeah. We saw a couple more of these creatures hiding near the ruins -- I recommend moving the dig site for obvious reasons. Security Officer Booth, signing off.

Harchek: Miz Booth. While your concern for these... "creatures" is noted, we shall not be moving the dig site. The Dahl corporation has sent Sanctuary, their greatest mining ship, to the godforsaken planet to mine crystals - and you have found some. Please round up the creatures so that my mining team may ... extract their minerals.

Security Officer Elyse Booth: Missus Harchek, I don't think you understand - you can't... 'mine' these creatures. They're living beings! Without the crystals, they'll die. Sanctuary could easily find another dig site - my security team and I are not hunting these creatures for you. Period. Security Officer Booth signing off.

Harchek: Mis Booth, need i remind of the terms of your contract? Your security team is meant to assist my excavation crew. Whether or not you agree with my policies is irrelevant. Shut your mouth, grab your gun, and me my crystals like a good little girl.

Security Officer Elyse Booth: Listen, you heartless bitch. My team has guns, your team has pickaxes. Move the ship or we will move it for you. Security Officer Booth signing o-- [Death Gurgle]

Harchek: You don't have all the guns, dear. Now - unless anyone from the late Miz Booth's security team has anything else to say - bring me my goddamned crystals!