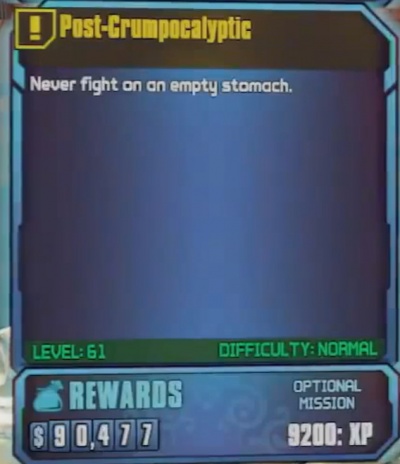 The Post-Crumpocalyptic Sidequest in Borderlands 2
.

"Post-Crumpocalyptic" is the side quest from Tiny Tina's Assault on Dragon Keep DLC in Borderlands 2. You are set of numerous sets of Crumpets that are scattered throughout the lands of Dragon keep.

Collect crumpets in The Forest 0/3

Collect crumpets in Mines of Avarice 0/3

Never fight on an empty stomach.

Hell hath no fury like an apathetic tree scorned.

Moxxi: "Times are tough sugar. Ever sinice the Sorcer cast his Crumpocalypse spell we've been runnin' alwful low on food. If you spot any crumpets, be a doll and grab 'em, wouldja?"

Mordecai: "What is a crumpet, anyway?"

Tina: "It is a criddle cake made from flour and yeast, traditionally eaten with butter. All I ever eat, son"

Mordecai: "Ever? Seriously? You should literally be dead."

Lilith: "Tina, you're thirteen years old. Maybe you should consider eating something other than crumpets. I brought food for lunch, you could --"

Tina: "WHY IS IT GREEN IT LOOKS LIKE THE DEVIL"

Lilith: "Tina, I need you to do me a favor and eat some salad."

Tina: "No! YOU FOOD FASCISTS! You can't AARGHHFHFHFH--"

Mordecai: "Don't let her bite you too hard, Brick. She gets a taste for blood, we're gonna have problems."

After the set inside the Mines:

Tina: "I can't believe you made me eat salad."

After collecting the Final Set of Crumpets:

Lilith: "Wait, you liked the salad? Why is that a problem?"

Tina: "You know who likes the taste of salads? ADULTS. I don't wanna be an adult!"

Lilith: "Tina, you're talking to three grown people who just collected a bunch of imaginary crumpets 'cause they thought it'd be fun. There's no such thing as adulthood."