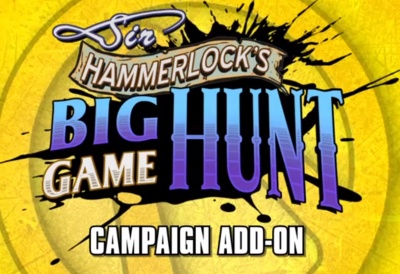 Note: Since lots of information was leaked to forums and communities, this page might contain spoilers. Read at your own risk.

On December 19, 2012, the DLC was officially announced via the Twitter channel @ECHOcasts. On December 20, 2012, @GearboxSoftware announced that the release date would be January 15, 2013.

The level cap will NOT be raised in this DLC. However, in an interview with IGN, 2K games mentioned that a level cap increase would occur sometimes in Q1 (Jan-Mar) 2013

(DLC3 has new campaign missions and new side missions)

A-Hunting We Will Go (main quest)

The Fall of Nakayama (main quest)

Now You See It

Egg on your face

Still just a borok in a cage

Lvl 30 or above. Going before that level will be very challenging. It is also advised to have finished the main campaign, as this DLC will have some campaign related spoilers.

Pandora Broadcasting (From Hammerlock DLC Trailer): Danger! Excitement! Mustaches! It's time for another episode of Vault Hunter Adventures, featuring Sir Hammerlock. In this week's tale, our hard-boiled heroes travel to the savage continent of Aegrus. Their goal? To uncover the most exotic creatures Pandora has to offer, and give'em the old one-two! But danger looms on the horizon for our swell swashbucklers...

Completed the mission: "The Fall of Nakayama" (Bronze trophy)

See: Borderlands 2: Been There Achievement Guide

Breath of the Seraphs

For info on which monster drops what, see:

Borderlands 2: DLC3 Uniques List and how to get them