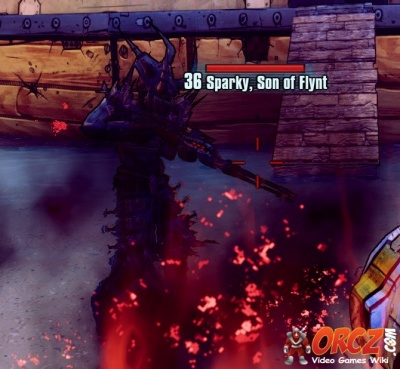 Sparky Flynt is a Boss in Sir Hammerlock vs. The Son of Crawmerax

Sparky Flynt can be farmed. He will appear in Sparky Flynt's Clubhouse each time a save game is loaded.

He will only run around some. He has a shotgun but it doesn't seem to do a lot of damage. He does have well above average health though. Expect the fight to take a short while but not too long.

The only unique thing he can do is throw out a Craw Thumper. This will call in a small worm to aid him in his battle. It is very weak and doesn't take much to kill.

Sparky Flynt has a chance to drop anything Captain Flynt can. In addition he can drop the heads and skins from this DLC.