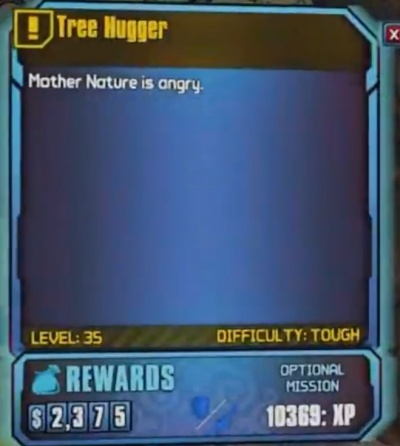 The Tree Hugger sidequest in Borderlands 2

Speak to Aubrey the Teenage Treant

Go to the lumber camp

TURN IN: Aubrey the Teenage Treant

Hell hath no fury like an apathetic tree scorned.

Aubrey the Teenage Treant needs you to go deal with a group of Orcs that have been harassing the forest and cutting down trees. She will give you a Sapling to plant in the middle of their camp. You need to head to the Orc Village and plant the Sapling where shown.

Aubrey: "Hey man. The forest needs your help. Or whatever. Some nearby orcs chopped down a bunch of trees for a lumber yard. Plant this sapling in the middle of their camp, alright?"

Aubrey: "Once you plant that sapling. protect it until it can gropw into its full size. And then it'll (yawn) wreak its vengeance on the orcs for defying mother nature."

As you plant the Sapling:

Aubrey: "You're near the camp. Just plant that sapling and show them nature's true power and blah blahblah trees. Now protect the sapling until it can grow to its full size. I'm gonna take a nap."

If the Sapling loses 1/4 of its health:

Aubrey: "They're beatin' up the sapling. Kay."

When the Treant is nearly grown:

When it finishes growing:

Aubrey: "Hey, the sapling's all grown up. Neato. Now help it take out the rest of the camp."

After destroying the last hut:

Aubrey: "Hey, you did it. Now you can truly (singing half-heartedly) 'paint with the wind's colorrrs.' ... They make us sing that. Like once a week. Come back whenev."

Mission Turn in: Aubrey: "Trees are so stupid."