Breath of the Wild: EX The Champions' Ballad 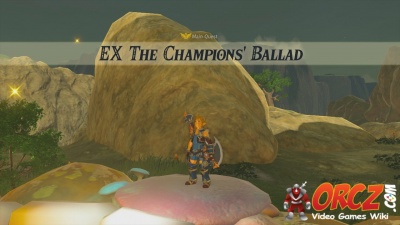 EX The Champions' Ballad is part of the Main Quest in LoZ:BotW

EX The Champions' Ballad is a Quest (Main Quest) in the game The Legend of Zelda: Breath of the Wild.

Zelda reaches out to Link. With his success overcoming the Divine Beasts, she directs him to return to the Shrine of Resurrection and return his Sheikah Slate to the terminal he got it from.

He will be challenged with another Trial and 4 additional shrines. After that, he must seek out the songs of his fellow Champions: Mipha, Urbosa, Daruk, and Revali.

The Shrines of the Beasts[edit]

Return to the Shrine of Resurrection[edit]

You do not need to worry about losing fight if you get knocked off.

Zelda: Link ... Link ... Link ... I have witnessed your journey. You have overcome every challenge laid before you. Ruta. Rudania. Medoh. Naboris. All the Divine Beast are now free. With the strength you have attained, I am certain you can unlock the powerful force hidden within. Go to the Shrine of Resurrection and return to the Sheikah Slate to its terminal.

Maz Koshia: I am Maz Koshia. I now address the one who wishes to master a Divine Beasts... To undertake this take requires unwavering dedication. That weapon defeats does with one hit. However, the reverse is also true, as its wielder will also fall to a single strike. You can use this weapon's ability only twice within a set period of time... only when it is glowing. When enough time passes, the weapon will regain its sheen along with its tower. At the four marked locations within the Great Plateau... defeat all monsters present to prove your power. If you are not up to the challenge, leave this plateau. The weapon will return here, and the trial will end.

Monk Maz Koshia: I am Maz Koshia. I must commend you for conquering the trial thus far. The door to the final trial is now open at the Shrine of Resurrection. Go, and face your destiny.

Monk Maz Koshia: To the brave soul who wishes to master a Divine Beast... You have done well to return to this place of beginnings. You have overcome many challenges thus far. Now, allow me to bestow upon you one final trial. Return the Sheikah Slate to the terminal you first obtained it from. Do so, and the final passageway will reveal itself.

Monk Maz Koshia: Welcome, hero. You have overcome many trials to reach me. Now it is time to face the final trial. This trial is a complex labyrinth. To start, you will need a map. You may obtain map information from the Guidance Stone.

Monk Maz Kosia: You faced that challenge with great courage. You have erased all doubt from my mind. You are a true hero. As such, you were destined to take hold of this ancient masterpiece.

Kass: Hm? Ah, it's you. I can't put my feather on it, but I get the feeling you're more accomplished than you were when we last met. I happen to have the perfect song for someone as esteemed as you. I would love to sing it for you. My teacher's unfinished song... the one I told you about... I finally completed the key verses! This lofty location is thew perfect stage to sing this special song. It takes place 100 years ago... at Hyrule Castle. Yes, the very castle you can still see over yonder. It's about the magnificent inauguration of the chosen Champions. If you would, please listen to this special song... The Champions' Ballad.

After this ceremony, they would all forever be known as Champions. My teacher always advised me to write song that transport the listen to the moment in time you're singing of. Now... I finally feel I understand what he meant... and the true power of music. By the way, I found this when I was looking through my teacher's notes. I was thinking... you should be the one to keep it. Your courageous heart reminds me of the indomitable spirit of the Champions. I know you'll treasure it.

A final thought... May the souls of the Champions who watch over Hyrule rest in peace.

Zelda: Link... Link... Link... I have watched your journey. Every step. You have overcome every challenge with great courage. With the power that you have attained... I am certain you can defeat Calamity Ganon. Truly...

Zelda's voice spoke to you...

She said because you have tamed all four Divine Beasts, you can now unlock the powerful force hidden within.

Head to the Shrine of Resurrection and return the Sheikah Slate to its terminal.

After returning the Sheikah Slate to the terminal in the Shrine of Resurrection, a mysterious weapon appeared out of nowhere.

You must due it to defeat all monsters at four locations within the Great Plateau.

The Trial will begin once you take hold of the weapon. 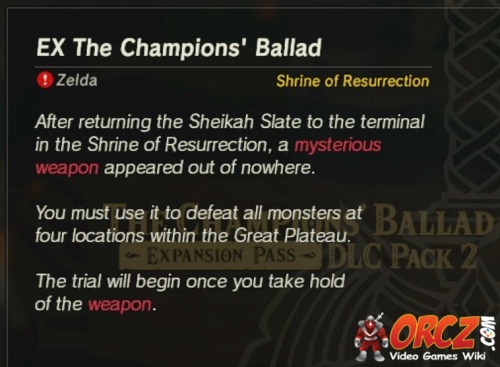 The One-Hit Obilerator, as the name suggests, can defeat enemies in one-hit. However, the wielder will also be defeated in one hit. Defeat the monsters at the locations marked on the map within the Great Plateau.

If you wish to quit this trial, simply leave the Great Plateau. The weapon will leave your hands and return to the Shrine of Resurrection.

There are four monster bases remaining. Conquer each Shrine that appears. 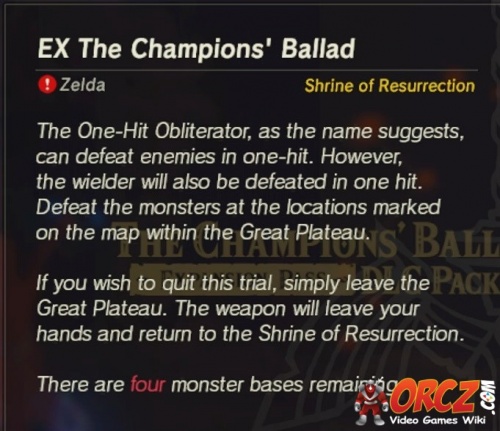 In the realm of memory, you defeated the powerful Phantom Ganons of the four Divine Beasts. You have also complete the four trials increased on the stone monument.

But this trial is far from over.

The door to the final trial in the Shrine of Resurrection has opened. Return there once more. 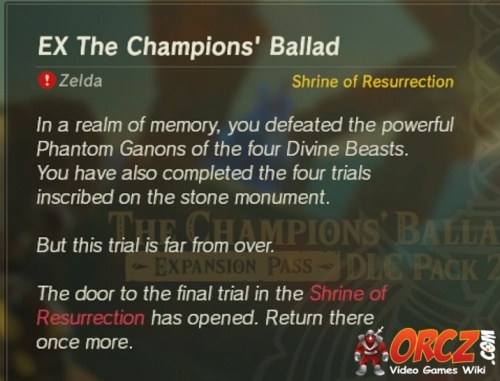 When you returned the Sheikah Slate to the terminal at the Shrine of Resurrection, the room shook and descended.

The shrine itself must have been designed to play a part in the trial... Once you reached the underground, an enormous space was revealed. 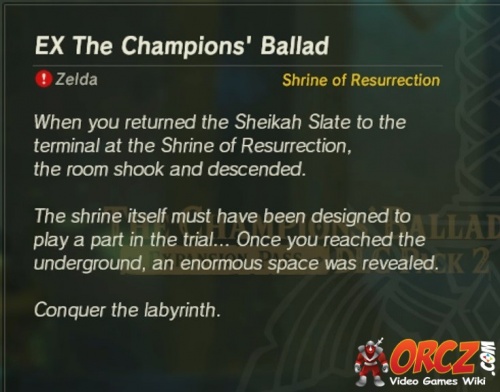 You reached the deepest area if the trial's labyrinth!

Before you could report your completion of the trial to Monk Maz Koshia, he rose before you and the final trial started!

Display your power by fighting Monk Maz Koshia and proving you are worthy of mastering a Divine Beast. 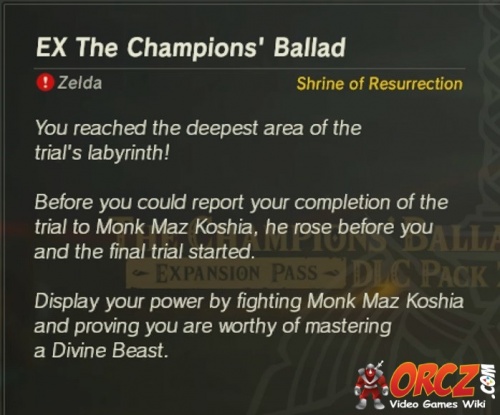