Breath of the Wild: Koko 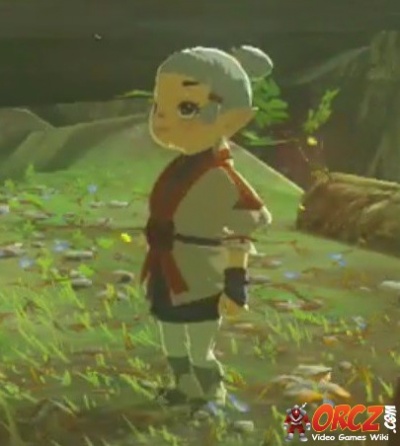 Koko is a character appearing in the game The Legend of Zelda: Breath of the Wild.

Koko promised that she'd make Cottla some Veggie Cream Soup and she wants to cook dishes for her family. Koko can be found between the hours of 12:00pm and 7:00pm, but not on rainy days (when she can be found crying at her mother's grave instead).

Koko: Today's dinner is Veggie Cream Soup. It's super nourishing and fortifying! Well, that's what they say, anyhow. It must be true. All you do is toss a swift carrot, Rock Salt, and some Fresh Milk in a pot and stew it up. Then, voila! So yummy! ... OH, NO! Koko is all out of swift carrots! But... Koko promised to make Cottla some Hasty Veggie Cream Soup...

Koko: Thank you! So much! OK, Koko just needs one swift carrot! Just one and Koko can get cookin'! Koko will be waiting for you here!

Koko: Is that...a swift carrot?! Thank you so much! SO very much! Now Koko can make dinner for Cottla... Yeah! Time to get cookin'!

Koko: Ooooh, it came out perfect! Here, please have some! Koko's treat!

Koko: Koko wants to try cooking different things so Koko can be a great chef, just like Mother!

Koko: What should Koko make now... OH! Hot buttered apple sounds good! Mother used to make it all the time! Cottla loves it too!

Koko: Koko is a bad daughter who can't do anything right. Koko will never be like Mother...

Koko: Is this... goat butter?! Are you sure about this? Really? Thank you so much! Koko means its! Stay right here for a second! Oh! Oh! And the apples are superbly sweet too! Here, take some. It's really something else.

Koko: Koko will work hard to get better and better at cooking!

Koko: Hmm, what should Koko make now... OH!! Koko will make Father's favorite! Tough Meat-Stuffed Pumpkin! It's great for an energy boost. Let's see... the ingredients are... Fortified Pumpkin and Raw Meat. Hrm? Raw meat? OH, NO!! Koko is out of raw meat. Koko could use a different kind of meat, but ... without raw meat, Koko can't re-create Mother's recipe... Father used to go hunting to make sure we always had raw meat. But he's at work right now... Koko is a bad daughter who can't do anything right. Koko will never be like Mother.

Koko: Is this... raw meat?! Are you sure about this? Really? Thank you so much! Koko means it! Stay right there for a second!

Koko: Mmm! What a scrumptious smell! Oh, and that savory smell pairs so well with the sweetness of the pumpkin! This is just how Mother made it! Here, have some! It's so good!

Koko: Koko will work hard to get better and better at cooking!

Koko: What should Koko make for dessert? OH! Koko will cook a honeyed apple! Mother loved those! It melts in your mouth and is sooo delicious! Let's see... The ingredients are... an Apple and Courser Bee Honey... Hrm? Courser bee honey? OH, NO!! Koko is all out of Courser Bee Honey... The bees attack you when you get close to their hives. It's too dangerous for Koko to go get more...

Koko: Koko wanted to make some for Mother in heaven... But ... Koko is a bad daughter who can't do anything right.

Koko: Wait... Is this...courser bee honey!! Are you sure about this? Really? Thank you so much! Koko means it! Just stay right there a second!

Koko: This... This is... Koko... remembers... When Koko had a fever, Mother would always cook this just for Koko. When Mother made her special dessert, she always put some of this in it. Waaah! Mother!! Koko... Koko... will do her best and try to be as good as you one day! Koko will get better and better! Koko promises! Koko was able to re-create Mother's dishes! Koko... feels better now! It's all thanks to you! Please, take this!

Koko: Oh! It's you! Koko has made a decision! Koko will become a chef when Koko grows up! THat way, Koko can make everyone happy with yummy food! This whole time, Koko has been relying on Mother's recipes. But from now on, Koko will come up with her own recipes too! To be honest... coming up with recipes is hard. Link: