Breath of the Wild: Mipha's Song 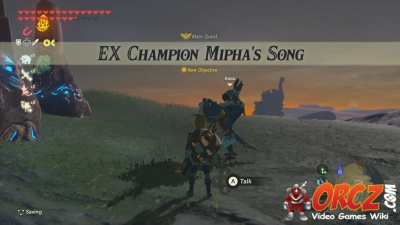 Mipha's Song is a Quest (Main quest) in the game The Legend of Zelda: Champion's Ballad.

The trials of the Champion Mipha are to be undertaken. Kass nearby the East Lake Reservoir has an unfinished song.

Maz Koshia: I applaud your courage in coming here. The locations that will be revealed to you are trials that will enhance the power sleeping within. Do not let your guard down...

Kass: The stone monument has survived for 10,000 years. What secrets does it hold... Hm? Fellow traveler... What brings you here? I suppose everyone has their own reasons for traveling. Look! As expected, there's one here too! One of the monuments mentioned in my teacher's unfinished song. Ah, sweet joy! How glorious to sing this song in the very land it describes... The song my teacher left behind... There's a verse about the trials that Champion Mipha overcame. Allow me to sing it for you...

...So? Did it move you? By steeping myself in legends of the Champions, I'm beginning to form a deeper understanding of them. This will prove invaluable in writing the key verses of the song. I can feel it... My teacher surely sang this very verse from this very spot... I wish nothing more than to carry on my teacher's dream to complete and perform this special song. To do so, I must learn all there is to know about the Champions of old. Thankfully, the Zora king and prince shared memories of their Champion with me. TO sing the completed song under this sky that my teacher so loved... that is the end goal of this long journey.

Kass: Well, well. Though our aims are different, our feet took us to the same destination. I speak figuratively, of course. I travel by wing rather than by foot. Ah! Wandering around here and listening to anecdotes about Champion Mipha has truly invigorated me. In fact, it has inspired me to honor her in my own way, separate from my teacher's unfinished song. That is why I felt inclined to roost here, near the Divine Beast Vah Ruta, which Mipha herself mastered. I've written a song... to try and capture the essence of Champion Mipha...

Recall the Champion of Ruta's wrath, before she walked her chosen path. Mipha's kindness was known to all, which is why the princess came to call.

Hmm... Though she was known for her kindness, it seems the Zora princess could be quite strict when necessary. So? What do you think of Champion Mipha's Song? By writing a song that captures the determination of Champion Mipha, I feel closer than ever to my dear teacher. The end result is not quite clear yet... but I'm beginning to feel a stirring of inspiration about those verses.

Mipha: You're so strong... so much stronger than before. The power of Mipha's Grace will now recharge much faster. As powerful as you are, I am certain you can save Hyrule... as well as the princess who awaits you.

The scattered One-Hit Obliterator led you to a location where a stone monument with a map of trials appeared. Kass's song seems related.

One, find what the light's path shows.

Three, chase rings of the waterfall. 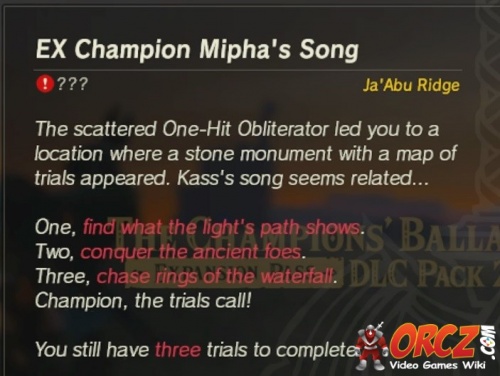