Breath of the Wild: The Search For Barta 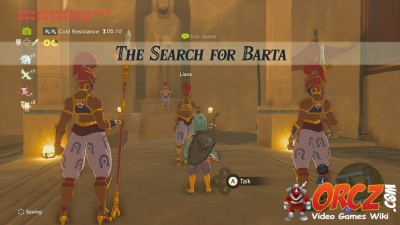 The Search For Barta is one of the sidequests in LoZ:BotW

The Search For Barta is a Quest (Sidequest) in the game The Legend of Zelda: Breath of the Wild.

Talk with Liana in Gerudo Town having freed the Divine Beast Van Naboris.

Be sure that you have a Hearty Durian in your inventory before leaving Gerudo Town.

One of the Gerudo Guards, Barta, has left town again to find the Leviathan bones. She left unprepared into an extreme area of the desert and past a Molduga.

Kotta: I'm afraid this time she went to investigate the leviathan bones in the southwest...

Liana: But obviously it didn't work because she's not here.

Leena: Well, yeah... But... Everyone knows that area is the domain of the Molduga, so who would figure she'd even go close to there?

Kotta: Yes, nobody would dare! And not only that, but it's an extremely hot zone, so we wouldn't last there in our gear...

Liana: You... You IDIOTS! That scatterbrain wouldn't even realize she was walking into danger! I mean, you know that, right?! Why, it was just the other day she ran off and got captured by the Yiga! Ugh... I guess Barta will be Barta, and you all aren't going to change... But still, why does she have to go and get in trouble like this all the time...

Liana: Oh! What a courageous vai! I heard from Barta! She said you found her! I told her you were as dependable as a Champion! If you were a Gerudo vai, I'd want you in my troop! Anyway, close one, huh? Looks like I got out of this without getting chewed out by our troop leader! You must be worn out, right? Here, take this as thanks! Buy yourself something nice in the market!

Barta has disappeared again. She headed south in search of leviathan bones but never came back. Not only is the area home to Molduga, but it's also known for extreme heat. You'll need special gear, or you'll be in danger. Use your map to search for Barta. 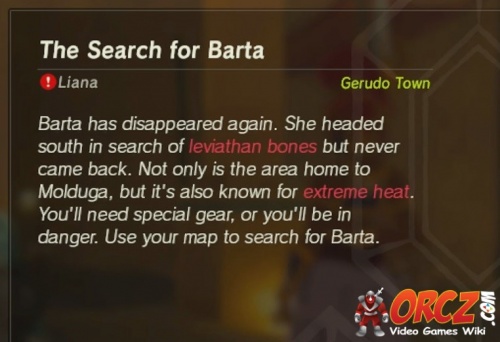 You found Barta collapsed in the desert.

She just keeps muttering,"A hearty durian," over and over again, deliriously.

...Seems like she really wants to eat a hearty durian.

You fed Barta hearty durian after finding her collapsed in the desert.

She seemed much better, but once you told her of Liana's anger, she dashed off back to Gerudo Town. Just in case, you should let Liana know that Barta is OK.

The Search For Barta Video Walkthrough