Breath of the Wild: The Serpent's Jaws 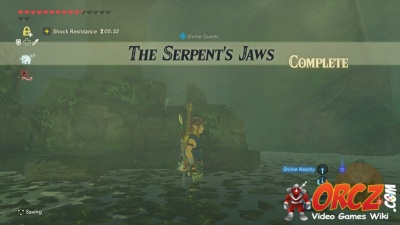 The Serpent's Jaws is one of the sidequests in LoZ:BotW

The Serpent's Jaws is a Quest (Sidequest) in the game The Legend of Zelda: Breath of the Wild.

Talk with Kass who is found just inside the Pagos Woods.

Kass has a song to sing for Link that tells of a secret within the woods.

You must figure out where the Forest Dragon is and find its jaws.

The ancient song that Kass sang at Pagos Woods is hinting at something...

"Where the forest dragon splays its jaws, A shrine sleeps with noble cause."

Your task is to decipher its riddle.

Kass recited the lyrics to an ancient song when you met him in Pagos Woods. You figured out the hidden meaning of the song and discovered the Spring of Courage as a result. It was at that moment that the voice of the Goddess spoke to you.

"Offer Farosh's Scale from the golden spirit to the Spring of Courage."