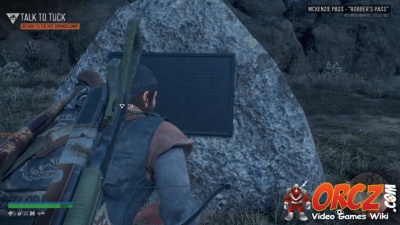 Robber's Pass is a Historical Marker in Days Gone.

"Mckenzie Pass is a mountain pass with a storied history. Once used by pioneers during the settlement of Oregeon, this pass became a popular spot for highwaymen, especially during the dangerous winters, who would rob the wagons attempting to cross. In 1879, John B. Waldo, American politician and local explorer, was traveling through the pass when he was stopped by bandits. Feigning ignorance of the area, he asked tghem for help getting to the summit pass, and the bandits compiled. Legend has it, that by the time they reached the pass, Waldo was able to parth with them without conflict, due to his amicable nature."