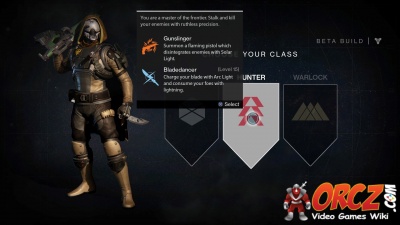 “You are a master of the frontier. Stalk and kill your enemies with ruthless precision.”

Hunters were once outlaws and survivors that roamed the wastelands and wilderness of Earth and beyond. They learned to use the Traveler's energies to this end. They have covered much of the planet out of the simple need to explore. While many fear they are too dangerous because of their independence, their contributions can't be ignored. Throughout the Golden Age it has been documented that Hunters lead the way for many expeditions. In present day their adaptability is priceless.

They favor long range weapons and their Hunter Knife. It is favored to have a number of stealth kills before engaging in ranged combat. This can also be used in melee for saving ammo and to deal with the last few enemies.

Hunters wear a 50-50 mix of cloth of armor. This gives them very high mobility but the trade off is durability. Mobility is key to controlling the encounter and forcing things into the Hunter's favor.

Hunters tend to have lean builds and light armor. They have a unique fifth piece of armor: a Cloak. This helps feature distinguish them from the other Guardians.

Gunslinger enhances the jumping and grenade abilities of the Hunters.

Bladedance further enhances the mobility of the Hunter and supercharges their Hunter Knife.

The first support class for Hunters. Geared toward Mob control and debuffs.