“Oryx, the Taken King” is a King of the Hive.

Oryx is said to have created the Taken using the powers of the Darkness. He came to the Solar System because the Guardians of Earth killed his son Crota.

Grasp of the King

Time to fight Oryx himself. Oryx is a very difficult opponent to defeat. He will always start with Grasp of the King and siphon off your Light. He will also summon in a small number of Taken Acolytes that will start attacking you. Do not count on using your Super in this fight without a lot of boosts to the amount of energy you get

Expect Oryx to teleport a fair bit throughout this fight. When he moves, try to find him quickly.

Start by shooting Oryx enough to stop him from Siphoning. This takes several head shots (or a lot of body shots). If you are quick enough, you will have some Super left. Thin out of the Acolytes after you stop the siphon and then attack Oryx himself. It will not be long before he attempts the Grasp of the King again. Once again shoot him to get the Siphon to stop. Get in as many shots as you can before the Taken force your attention back to them. Likely, Oryx will teleport away after several shots

Oryx will appear elsewhere in the Altar. When he does, expect him to use Grasp of the King again. Find him and stop him. After that, continue to do damage to Oryx. Watch out because there are now Taken Fallen scattered around.

When you get Oryx to half or lower health, he will start to use his other main attack where "the air around you crackles and burns ...". Watch out for that and immediately start running from your present location. He will loose a massive torrent of energy on you if you stay still. Dodge the attack, find him and keep shooting him. Eventually the fight will move into the next part. 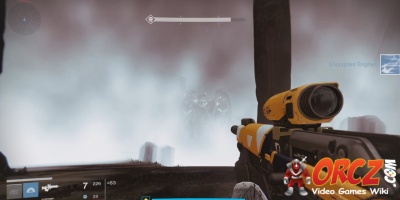 You are pulled into the area where Oryx initially appeared. This will last through the remainder of the fight. The area will be shrouded in a fog you cannot pass through. Oryx will in the fog beyond. Until he leaves the fog, he cannot be harmed. You have to wait for him to emerge. He will also fire off burst of energy at you if he stops for longer than a few seconds. Watch the fog for Oryx carefully.

You will periodically be attacked by Taken Thralls. Oryx will summon them up and loose them on you. They are good for some quick ammo but they are also something of a distraction. 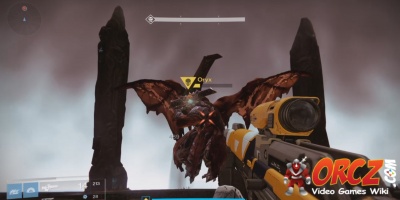 When Oryx does emerge, he will come at you with his sword: Willbreaker. He will fly out at you and take a swing. It does mighty damage so be warned. It will throw the Guardian a good distance as well. Use all this time to get in as many shots on Oryx as you can.