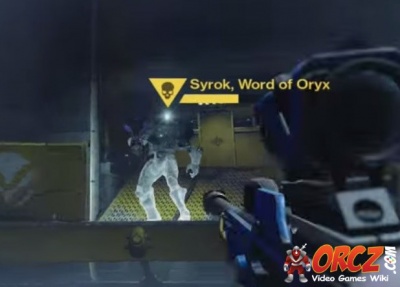 Syrok, Word of Crota in Destiny: The Taken King.

“Syrok, Word of Crota” is a Major of the Taken.

Syrok can loose a fiery blast from its one white glowing eye. These act similar to grenades and are tracked as such. They inflict Burning if you get close to them or are hit by them.

Strafing Cyrok and using the cover on the opposite side of the room from him is a great boon. If you can get a lot of precise hits with a high power weapon, do so. This will get through yoru first mini-boss in the Taken King very quickly.