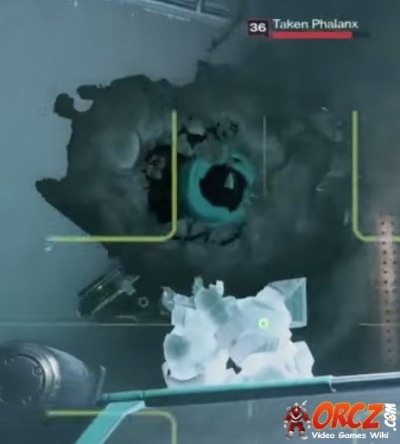 “Taken Phalanx” are a type of Taken Cabal.

They are very similar to the Phalanx of the Cabal.

A mobile defensive front. You need to flank them to have any chance of getting past the shield. Another strategy is to shoot the phalanx's exposed hand (the one with the gun), which can deal mild damage even when the shield is raised. Deal enough damage this way to cause the phalanx to recoil in pain, briefly lowering his shield in the process and opening up an opportunity for a headshot/bodyshot. They will either push forward or hold their ground, creating a wall of shields.

They can fire bursts of energy from the portal on the front of their shield.