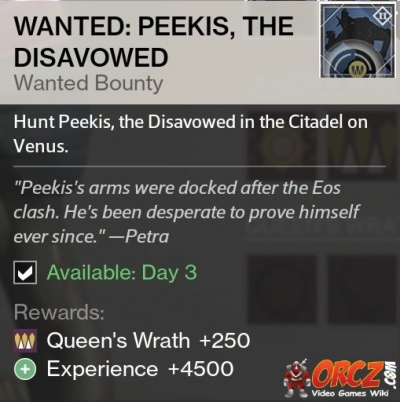 The Bounty Wanted: Peekis, the Disavowed in Destiny.

“Peekis's arms were docked after the Eos clash. He's been desperate to prove himself ever since.” - Petra

Hunt Peekis, the Disavowed in The Citadel on Venus 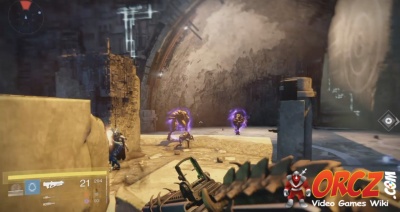 This Wolf Pack can be found in the Citadel. They frequently appear in the upper reaches of it.

The first wave consist of at least 4 Scorch Captain. These Elite Fallen have the new drop weapon: Scorch Cannons. From here your group will be able to get 2 of them.

The second wave has more variety. You will find the new version of the Dreg: Wolf Scavenger mixed in with Wolf Captains and Wolf Vandals. The Scavengers like to duck behind the piping for cover. Watch for this happening. If the Fallen Ship does not appear shortly after then you know one is still alive.

The third wave has Silent Fangs with a Wolf Servitor and more Vandals. These are shielded and drop while invisible. This combination can be tricky to deal with. They are protected by Arc shields so blast away with Arc Weapons to make fast work of them. If you still have shots in your Scorch Cannons, this is a great time to get through them.

The fourth wave has Silent Wolves and nothing else. This is one of the more difficult waves to take on alone. This is because it is very hard to keep track of all 4 Stealth Wolves. Most are melee so they will be coming after you.

The fifth wave has 2 Wolf Servitors, 2 Wolf Captains and a few Scavengers.

The final wave consist of a number of Captains with Silent Wolves and Peekis, the Disavowed. This wilely Dreg will keep on the move constantly.