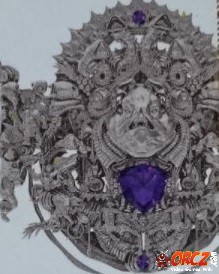 Emperor Calus is a Cabal NPC in Destiny 2.

The former Emperor of the Cabal Empire. He was overthrown by the Consul and Dominus Ghaul. He was seen as weak and decadent as an Emperor for his peaceful ideals. Too popular to be killed, he was exiled from the Cabal Empire and sent off to wander the universe in his ship.