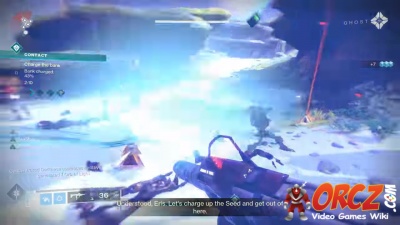 First Contact is a limited time Public Event in Destiny 2: Season of Arrivals.

A Pyramid Shard has descended down to the surface of a planet (shown is on Io). Using this, the seed needs to be charged up, drawing energy from a modified Gambit Bank.

The Taken's Shield draws power from a nearby pylon.