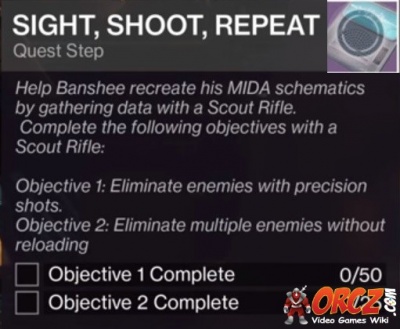 Sight, Shoot, Repeat is a quest step in Destiny 2.

"MIDA. MIDA. Old name. Almost as old as me. Lost a bunch of my schematics when the Tower went down. Could recreate one for you. If that's the kind of thing you're into."

Help Banshee recreate his MIDA schematics by gathering data with a Scout Rifle.

With a Scout Rifle