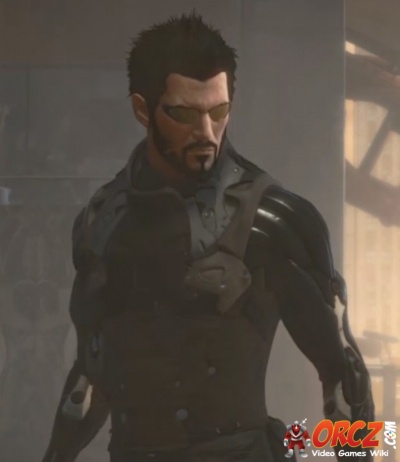 During his infancy he was subjected to experimental genetic therapy treatments by White Helix Labs, a subsidary of Versalife. All other children in his test group died from the treatment. The two scientist in charge of the experiment with Jensen realized that they had succeed with him but had grown attached to him and did not want to continue experimentation on him. TO ensure that no other children were subjected to the same experiments, they burned down the lab where the experiments were conducted. They were later murdered by the shadow group, the Illuminati and listed as causalities of the same fire that took the lab. However, the scientists' plan succeed and one of the nurses, Michelle Walthers took him in after rescuing him. She gave him up and he was adopted by Arthur and Margie Jensen. He lead a normal life for the rest of his childhood and adolescence.

Unknown to many, the genetic treatments that Adam received allowed his body to accept and fuse with the PERDOT electrodes that are key to augmentation. Instead of forming glial tissue buildup, which eventually causes a body to reject the augmentation, the bonding between tissue and electrode would increase and strengthen over time. This genetic trait he unknowingly carried is widely regarded as the "secret of universal augmentation".

After getting a degree in Criminal Justice, he joined the Detroit Police Department at the age of 21. 4 years later, he volunteered for the Department's SWAT unit. He was accepted and placed under the command of Quincy Durant. There, he quickly rose though the ranks. He was soon in command of the squad with Durant.

Jensen and Durant worked very well together but that came to an end after an confrontation ended badly with a suspect. The suspect was an augmented murderer who almost killed Durant. Durant, to be saved, had to be augmented. Durant started becoming more unstable after his augmentation. However, after what become known as the Mexicantown Massacre, Jensen left the Police Force and SWAT. Jensen's superiors placed the blame of the incident on Jensen.

When Adam Jensen left the DPD and SWAT, he was in a relationship with Megan Reed. Megan worked for Sarif Industries as a neurologist. She had discovered his unique genetic trait and asked her employer David Sarif to hire on Jensen both for his skills and to ensure access to his genetic material. The relationship between Jensen and Reed continued until the start of the events in Deus Ex: Human Revolution.

Adam Jensen received his mechanical augmentation following the attack he attempted to thwart during a summit. He was almost killed and Reed was apparently killed (though actually abducted) during this attack. Sarif took advantage of this situation, Jensen's unique genetic make-up and a clause in the employment contract to perform the single most extensive augmentation of any individual to date. This led him to be in his present state.

After the events of Deus Ex: Human Revolution, Sarif Industries had to close its doors. Jensen found employment with Taskforce 29 founded by Interpol.

Jensen also works for the hacker group known as the Juggernaut Collective. It was with their influence that he was able to join Taskforce 29. He, along with the collective want to track down and end the influence of the Illuminati.