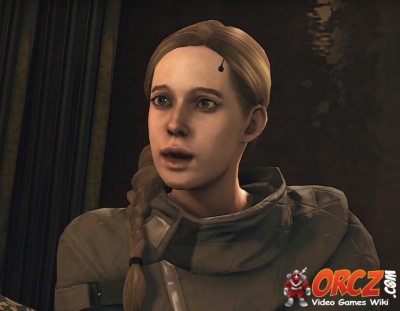 Daria Myska is a person in Deus Ex: Mankind Divided.

Until 2026, Daria suffered from extreme social anxiety. She could not eat outside in public or look people in the eye. She became a patient of Doctor Nicholas Cipra who performed an experimental augmentation procedure. the procedure was considered a success. There was still cause for some concern because she started to eat at the same time as the donor personality. Most would see this as Darla's personality being overwritten by the donated personality.

Completing the Harvest properly without any arrest being made, Adam will contact Daria and tell her to keep a low profile. She will be happy to know that Adam is watching out for her.

Daria was never in any danger. Because of the donor of the Personality Supplement that she got, she was the killer. As it turns out, no one was willing to come forth to donate a personality package. Tai Yong Medical offered incentives to penitentiaries. This resulted in Daria getting a supplemental personality from Marek Svobotka, also known as the Harvester

She has an override phase (Ad hominem 2026) which can be learned from Dr. Cipra during the Last Harvest. This will allow Adam to debate Daria instead of fighting her.