Deus Ex Mankind Divided: How Not To Get Yourself Killed 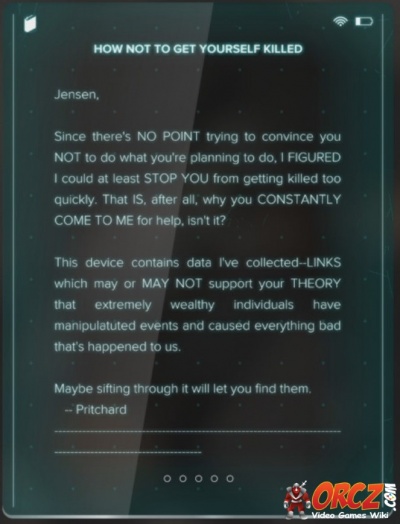 How Not To Get Yourself Killed in Deus Ex: Mankind Divided.

How Not To Get Yourself Killed is an eBook in Deus Ex: Mankind Divided.

Since there's NO POINT trying to convince you NOT to do what you're planning, I FIGURED I could at least STOP YOU from getting killed too quickly. This IS, after all, why you CONSTANTLY COME TO ME for help, isn't it?

This device contains data I've collected -- LINKS which may or MAY NOT support your THEORY that extremely wealthy individuals have manipulatuted events and causes everything bad happening to us.

Maybe sifting through it will let you find them

"The hearings were suspended after a terrorist at Sarif Industries claimed the lives of leading researchers..."

"This marks the second time in six months that an attack has been directed against the biotechnology firm..."

"The Shanghai-based augmentation developer increased its market share by 7.3% this week by purchasing yet another human enhancement firm..."

"Hoping to end the growing controversy, billionaire Hugh Darrow has invited high-ranking government officials and key players in the human enhancement field to the Artic..."

"All at once augmented individuals around the world went crazy, attacking and killing everything in sight, just as Darrow's broadcasted welcome speech began..."

"Densely populated, augmentation-friendly cities have suffered the most, although the damage has not confined completely to them."

"Already reeling from losses incurred during the Aug Incident, Belltower Associates' fate was sealed when hackers linked to the Juggernaut Collective leaked details of a black site facility."

"Hard hit by both the Taggart Act and a variety of new local and international laws, Sarif industries joined many of its competitors by closing its doors today ..."

"To cope with rising violence and racism against Augs, governments all over the world are enacting harsh laws. But these laws will, in fact, only encourage more acts of terrorism."