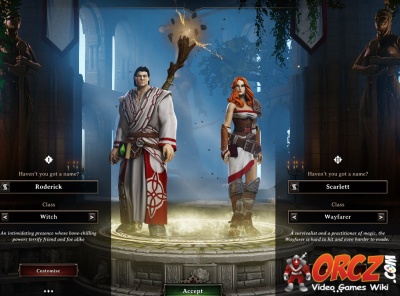 When starting a new game, you will need to create your two main characters before starting your adventure. These are the protagonists of the story, and you have the power to give them a background story. You decide who and what they are. Is one of them adept at thievery and the other a fledgling mage? Or is one an expert marksman and the other a feared swordsman? Throughout the game, you will have to make many decisions, but the first is the most complex: Which role will you play?

Divinity: Original Sin is a classless game. This means that a hero can use any type of weapon or armour, and that he or she can learn any type of skill or ability available in-game. However, Divinity: Original Sin is a party-based game with turn-based combat, so it is a good idea to build a party that covers many talents. A party with only fighter-type characters or a party with only wizards may be possible, but is not recommended for first-time players.

During character creation, you can select a preset character build from the list. The name of the preset describes the role of the character. If this is your first play through and you are not yet familiar with the game's rules, it is recommended you choose one of these presets. You can see what is included with your chosen preset by clicking the “Customise” button. While in “Customise” mode, you can change the character's name and appearance.

If this is not your first play through, or if you have played many RPGs before, go ahead and customise your characters to your heart's content by tweaking their stats, skills, abilities, and talents.

But don't be afraid to make mistakes. Because this is a classless game you can turn the frail but smart witch you started with into a battleaxe-wielding powerhouse within a couple of levels. And she'll still know some of her magic spells, to boot!

Note that in Divinity: Original Sin, your party can contain up to four people (not counting any summoned creatures). Companions or henchman can aid your two main heroes. You will have to find, hand-pick, and recruit these two extra party members in the game world. Good places to look for fellow adventurers are taverns, inns, libraries, and other common meeting places in any given town. It is a good idea to reinforce your party with extra members the moment the opportunity arises

The character presets in Divinity Original Sin are: