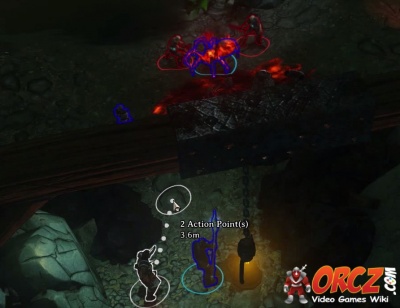 Surfaces and clouds are elements on the floor or in the atmosphere. Everything from simple puddles of water to pools of blood are special elements which can be used in special ways with just the right skill or arrow type.

Surfaces and clouds tend to be status-affecting, therefore walking through a surface can be very dangerous. A fiery surface will set you on fire, incurring a burning status that will deal damage each turn until removed. Walking upon a surface of ice has a chance to knock your character down, and your character will have to skip turns until your saving throw allows them to stand up, until the effect wears off, or until an ally helps them up. Some enemies will leave strange surfaces or clouds after they perish, so you must remain careful.

Surfaces and clouds can be changed, removed, and interacted with. For instance, throwing a fireball on an ice surface will cause the ice to melt, reforming it into a water surface which is susceptible to electric attacks. If there is an oil barrel between your character and an enemy, striking the barrel with a fire skill will cause it to explode; on the other hand, shooting it with a regular arrow will cause the oil to spill out. This will allow you to slow enemies that attempt to wade through the oil and also let you light them on fire.