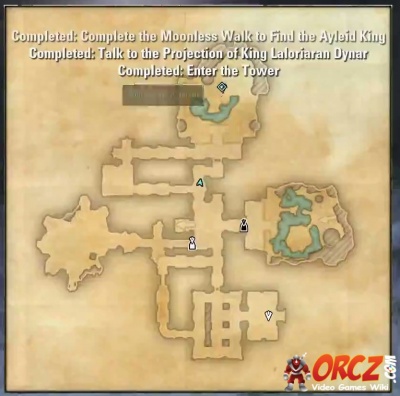 Recover Oubliette Crystals, one of the quest tasks in Light From The Darkness

Light From The Darkness

Just past the projection you will encounter some new kinds of Soul Shriven: Scourges and Keepers. Deal with the two pairs of them then turn to the South and head on down the stairs. A way down the corridor you will encounter another Shriven Keeper and a few more Essence of Darkness. Head to the East then go on up the stairs into the next part of the Lightless Oubliette. There are more Essence of Darkness in this corridor and more Shriven Scourges. Make your way to the East from there. This will lead you directly into the Library. In the middle of it you will find the Mindshadow Crystal.

Head back into the previous room. Go to the Northern part of it where you see the gate. To the right of the gate is a switch which can be activated. Toggle it to raise the gate. Head on through it to the main room. head to the middle of it and place the Mindshadow Crystal on its stand. Now you need to track down the next crystal.

Head to the North this time to find the Lifeshadow Crystal. Look for the passage leading off to the West. Head on down it. This will take you to the Lightless Oubilette Garden. Head into the room at the Western end of the corridor. There are a few more Essences of Darkness here. Deal with them. After that head to the Northeast. Expect to encounter a Hoavor and a Strangler as you make your way to the North to reach the Garden. Head on down the stairs. You have a number of Hoavors and Stranglers to deal with.

Head into the Frozen Alcove to the West of the main room. Get to far Western portion of the room. You will find the Flameshadow Crystal just sitting in the middle of the room. Head over to it and take it. This will cause the crystal to raise but you can't grab it just yet. First you need to defeat the summoned pair of Frost Atronachs. just keep on the move and it shouldn't be too hard, but it will take some time. Head over to the Flameshadow Crystal after that.

After you take the Flameshadow Crystal, the Frozen Alcove will become filled with fire and magma.