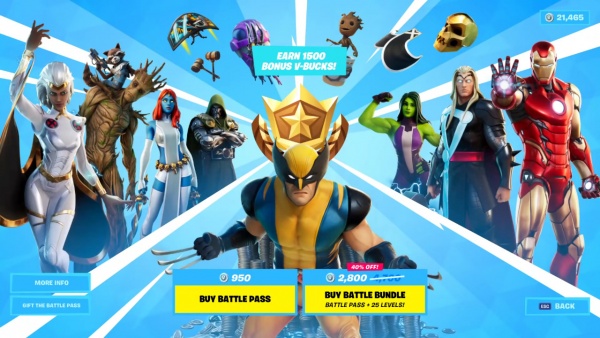 You have to purchase the Battle Pass to unlock it. The prices of all Battle Passes up to Chapter 2, Season 2 has been priced at 950 V-Bucks. It is unlikely that it will change to a real money system for unlocking the Battle Pass.

Even if you don't buy the Battle Pass or Battle Bundle, you can still earn free rewards. Before Chapter 2, there was a separate free pass in which you could earn items. In Chapter 2, the free items replaced some of the previous paid items and combined into a single, linear pass.

Following start of Chapter 2, season XP and Battle Pass tiers were combined into a single leveling system. Most actions you do in game gives you XP which levels up your battle pass. For example, surviving storm circles, opening chests and ammo boxes, getting eliminations, and winning a game will all give you XP. On top of that, you have many sets of challenges which will earn you XP.

Prior to Chapter 2, to progress in the Battle Pass, you needed to earn Battle Stars.

Doing challenges was the fastest way to get the Battlestars, completing a daily challenge gives you five battle stars, while weekly challenges can grant up to 10 Battle Stars.

Each season has its own general theme for the Battle Pass. However, not all skins follow the theme.