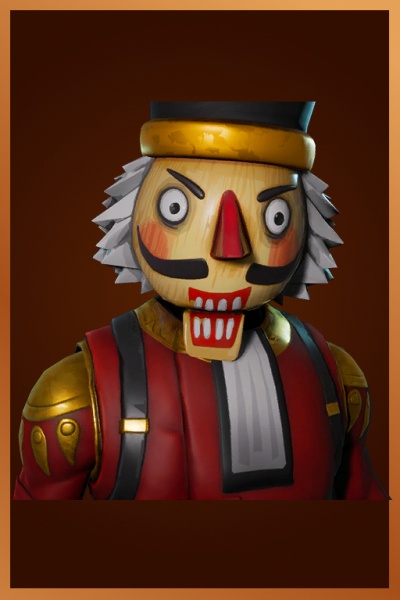 The Crackshot Outfit in Fortnite BR. You can buy it from the Cash Store for 2,000 vbucks.

Crackshot is the name of one of the outfits in Fortnite Battle Royale.

Get out there and... crack some nuts.

Part of the Nutcracker Set.

This character was initially available to buy in Fortnite Battle Royale in the Item Shop from time to time during December of 2017 to January of 2018.

This skin very rarely appears in rotation. It recently came back for Christmas 2018 after not being in the shop for nearly a year. Therefore, this skin is very rare and sought after.

If you don't get it during December 2018 or January 2019, you may not see him in the shop until next year. So if you want this skin get it while it's in the shop and don't wait.

Bonus: This skin comes bundled with the Epic Birdshot Back Bling