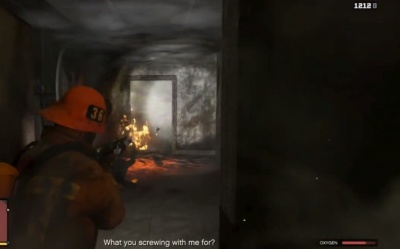 Get down to floor 50

"Get down to floor 50" is an objective in the story mission The Bureau Raid (Fire Crew) in Grand Theft Auto V.

Franklin will come to a short while later. Michael will be calling to him through the headset. He will explain to Franklin that the FIB have figured out they aren't firemen and have sent in a team to deal with them. Arm yourself with something and start fighting you way through the next few rooms in front of you.

Go over to the West and make it into the stairwell. Use it to get down to Floor 51 of the FIB Building. Deal with the agent in the stairwell then just head for the markers on the Minimap showing where Michael and the Gunman are. The crew is back together but the building is still burning.