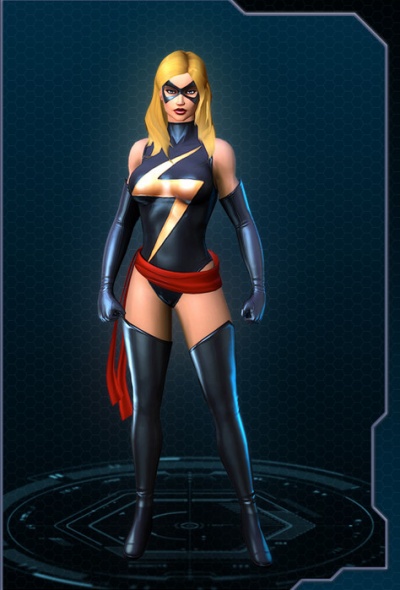 NOTE: Credit to this guide goes to user "AqueousCactus " from the forums

First off, her basic attacks are awesome! Both hit hard, hit fast, and Ms.Marvel looks badass doing them. No complaints here. However, these attacks (particularly Photon Punch) are really the only consistent source of damage Ms.Marvel has.

Her first Brawler move, Roundhouse Kick, is counter-productive to her melee/tanking playstyle in that in knocks mobs away; I think a knock-up/down would be preferable. The damage is adequate, as I view this as more of a utility power rather than a damage one.

The passive, Kree Toughness, is nice while leveling, but spending more than one point here is a waste, as it scales poorly, and in all likelihood flat number increases in defense aren't going to be of use endgame. I believe either larger defense increase per point would be nice, or preferably, a percentage increase instead.

Next is Uppercut Blast. The animation for this power is badass, and that's really all it has going for it. While looking cool, the animation is beyond slow, often missing, as well as locking Ms.Marvel in place, a death sentence in an ARPG. I think merely speeding up the animation (a lot) here would be a significant improvement, as the damage is sufficient in relation to its spirit cost.

Her first power, Photonic Blast, is fairly good. Highly spammable, cheap to cast, and with decent splash damage, it serves its purpose in softening up mobs so Ms.Marvel can proceed to punch them to death. A minor damage increase would be nice, but not necessary.

Next is the passive, Energy Absorption. This passive needs major help to justify placing precious points here. It offers a paltry amount of spirit gain when taking energy damage, and scales very poorly. In order to be considered usable, it either needs a significant increase in spirit return (as thus far energy damage isn't all too common), or perhaps a lower amount of spirit gain, but any damage taken grants spirit. Ms.Marvel is intended to be somewhat of a tank, so why not incentivize us to take a beating for our party?

Ms.Marvel's third power in this tree is Photonic Wave, another ability with a cool animation, but lackluster performance. First off, the spirit cost is absurdly high for the pitiful amount of damage it does. I suggest either lowering the spirit cost, or increasing the damage to justify using this skill. As it stands, the only reason to put points here is for the synergy bonus. Also, the animation is slow, and locks Ms.Marvel in place. Speeding up the animation would also go a long way in helping this power.

Next is Photonic Defense. Like all blocking moves, this ability could use some tweaking. While the damage reduction is nice, locking yourself in place is not. I think using it as a fire-and-forget ability that grants a short damage reduction buff would be nice, allowing movement at the same time. However, this buff would be nerfed significantly for balance purposes.

Her next power is Stellar Beam. Honestly, I don't see the reason this ability exists. It costs more to cast than Photonic Blast for a marginal increase in damage. It is also unlike to hit as many enemies. A damage increase if the only way to justify placing points here, as well some synergy bonuses to other powers.

First is Flying Lunge. A wonderful utility skill. Great for closing the gap to face-punch mobs, or to escape a hard hitting boss. A one point wonder, as its use is primarily for mobility.

Next is Cruising Altitude. A movement power, this is currently bugged for Ms.Marvel, and offers no speed bonus. Personally, I think all movement powers should be a separate keybind off the bar, but that's a different topic entirely .

Third is Evasive Blast. Another skill marred by a clunky and slow animation. Honestly, Flying Lunge makes for a far better escape tool, as it is faster, cheaper, and easier to aim. The slow is moderately useful, but the damage/spirit cost/animation time do not warrant using this skill. The only way to make this skill somewhat useful would be to tweak these faults, as this ability is outclassed by Flying Lunge in every way at the moment.

The last thing to take note of is Photonic Energy mechanic. In theory, this mechanic sounds great. But thus far, not enough enemies deal energy damage for it to be a game-changer. I would love for it to either be any damage that fills this gauge, which would in itself go a long way in improving Ms.Marvel's damage output. If not, increasing the amount of damage it adds, while keeping it exclusive to energy damage filling the bar, would also be a decent improvement. As it stands, this mechanic just isn't really noticeable, which means something is wrong with it.