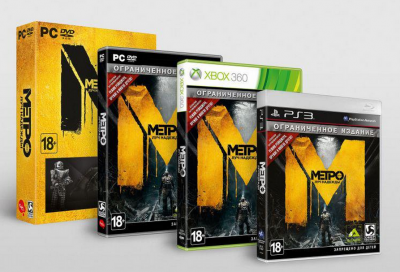 Metro: Last Light is the sequel to the cult hit Metro 2033 for Xbox 360 and PC, based on the critically-acclaimed and best-selling novel series of the same name that originated in Russia.

Like the last game, Last Light takes players to the post-apocalyptic underground of Russia, where vicious mutants, aliens and humans all pose an equally terrifying threat.

Last Light expands the series to the Playstation 3 for the first time.

Picking up where 2033 left off, Metro: Last Light takes players to the dark undergrounds of Russia.

A nuclear war left the surface of Russia a wasteland years ago. Between the radiation, the wildly varying weather, and the vicious beasts that roam the charred surface, survival was impossible. In a desperate bid for survival, Russia ushered as many of its citizens as possible into the metro tunnels that wind beneath the surface. Now, the city's various factions all compete for survival in the claustrophobic tunnels while something altogether more sinister lurks in the shadows.

Metro is unique in the way that it handles ammunition.

Ammo comes in two types: Pristine and old. Both types can be fired from weapons, but can also be traded in at shops for currency.

Metro is also unique in the way that it handles radiation. Players can survive monetarily on the surface by using a gas mask, but they must quickly find and secure another before the first runs out of clean filter.

Metro 2033 was published by THQ, and this sequel began development under their care.

When THQ filed for bankruptcy and sold off their assets in 2013, Metro: Last Light was sold to its current publisher, Deep Silver, alongside Saints Row 4.

Metro: Last Light will release on Xbox 360, Playstation 3 and PC.

A Wii U version was in development while at THQ, but was canned in hopes of saving resource money for the publisher.

Metro: Last Light will release on the following dates:

Recommended - For Medium to High Settings