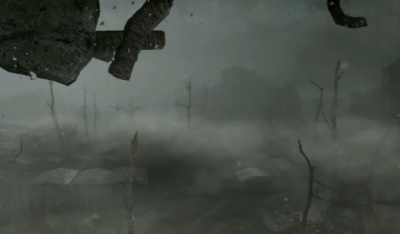 The irradiated surface of Russia, bombarded by nuclear weaponry years ago and now plagued by harsh weather and horrible mutants.

Artyom and his companions must trek to the surface several times during their journey to save the underground.

When on the surface, players must equip gas masks to stave off the radiation.

Otherwise, the lingering effects of the nuclear bombs will quickly erode their bodies and kill them painfully.

Unknown enemies lurk on the surface.

Certain enemy types have been spotted and look like dogs, large spiders or even strange pterodactyl-style creatures, but most don't live to tell the tales of encountering these mysterious creatures.

Weather on the surface ranges from harsh dust storms to downpours and even snowstorms brought on by the constant cloud coverage.

No matter what, you're guaranteed a pleasant day.