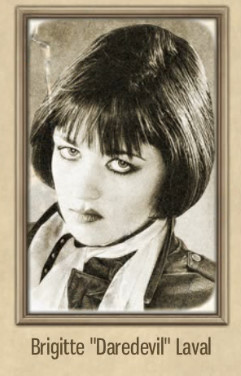 These are the initial stats for her:

Bonjour. mon ami I am Brigitte Laval The best pilot and smuggler this side of the Atlantic.

I've heard good things about your gang and I want to join up. Let me assure you I am far better then both of your current associates. You should fire them and hire me instead.

Another talent unlocked at level 4

Another talent unlocked at level 8

Brigitte Laval was born to a patriarchal family of wealthy French immigrants. Her father wanted to prepare her for marriage and sent her to a socialite damsel school in New Jersey. But her rebellious and independent spirit drew her to the new and adventurous and she secretly attended flying lessons. When she won an Air Derby her hobby became apparent and her father threatened to disinherit her if she didn't give up flying immediately.

Brigitte hesitated little before rebelling openly to her father and she fled stealing training biplane. The young criminal began smuggling booze for various Atlantic City gangs with her biplane and earned reputation and the nickname Daredevil.