Skyrim: A Few Words With You 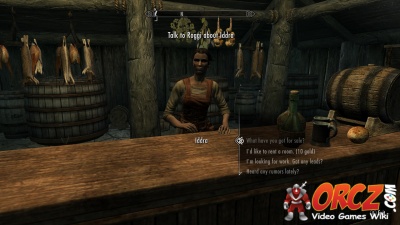 A Few Words With You in The Elder Scrolls V: Skyrim.

A Few Words With You is a Radiant Quest in The Elder Scrolls V: Skyrim.

Carlotta Valenita runs a food stand in the market of Whiterun. She is mostly fine with the attention that she gets while conducting business. She simply wants to take care of her daughter, Mila. However, Mikeal is taking things too far and she wants him to stop.

Persuade - Successful with a Speech skill of 17+

Brawl - Success has you skip the fight. Failing will start the fight. Win the fight to get him to leave Carlotta alone

Roggi Knot-Beard can be found in the Braidwood Inn or in the nearby mining camp. You need a Speech Skill of 17+ to successfully persuade him. You can also offer to pay the tab yourself or fight him. If you have completed his request to find the ancestral shield, then he will simply agree with you.