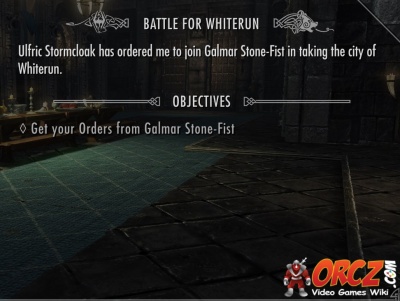 Battle for Whiterun in The Elder Scrolls V: Skyrim.

“Battle for Whiterun” is a Stormcloak Quest in The Elder Scrolls V: Skyrim

Make your way out of the Palace of the Kings and travel out toward Whiterun. You will need to head to the Whiterun Military Camp. This location is automatically added to your map for easy fast travel. 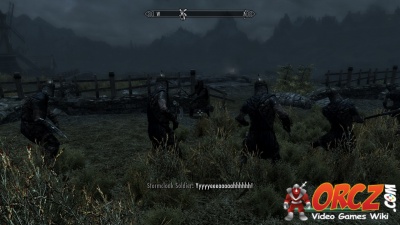 As you approach you will see that the siege of Whiterun is already underway. Go over to where you can see Galmar Stone-Fist talking with his troops. You can find him between the two catapults. Listen in. He will explain that the destination the drawbridge. Your first goal of this siege is to get it back down. 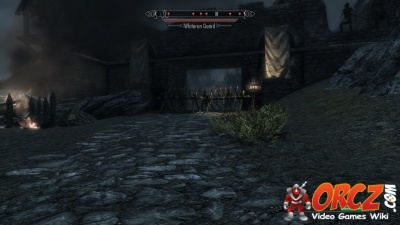 Head along the path to Whiterun. As you reach the first archway of the town you will see a barricade set up in front of it. You will need to hit it a 3-4 times to break it down. Follow the path as it curves up. This will lead to the raised drawbridge. Now you just need to lower it so the rest of the force can get through. 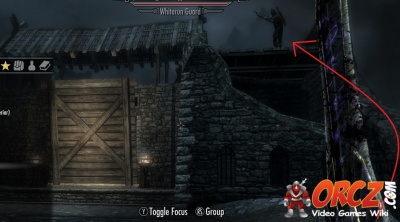 Your next goal is to lower the drawbridge. It is not too hard to pull off. There is a sloped wall just to the right of the drawbridge. You can jump up onto that and then run up it. This will quickly get you to the top of the battlement. There you will encounter Whiterun Guards and at least 1 Imperial General with other Imperial Soldiers. 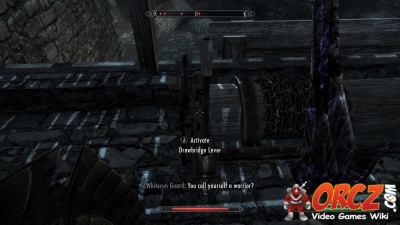 On the battlement, head over to the left. There are 2 levers above the drawbridge. Pull either one. This will get the bridge to come crashing down. The Stormcloak forces will start invading and the Whiterun and Imperial Forces will retreat inside Whiterun itself.

Inside Whiterun you will need to head for the market place. Just go straight forward from the entrance to the city. Follow the path to the market. When you make it there, turn to the left and take the stairs up. Smash through the barricade. Head straight past the tree and start up the stairs leading you to Dragonsreach. There are more Imperial and Whiterun forces to deal with. Just cut through them and keep going up the stairs. 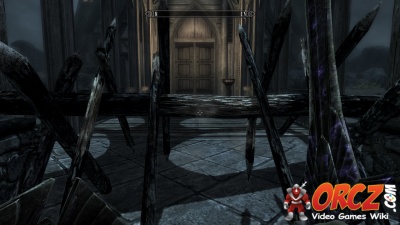 Once inside Dragonsreach the final fight for the city will begin. Balgruuf the Greater and his force will come after you. His house carl Irileth will join in the fray. Be sure to keep a little distance from here as she will typically cast one of the elemental cloak spells to protect herself. The guards that rush you are weaker than the ones you would normally encounter. They are easily defeat. After that, just focus on Balgruuf. You need to get him down to 25% or near death to conclude the fighting. 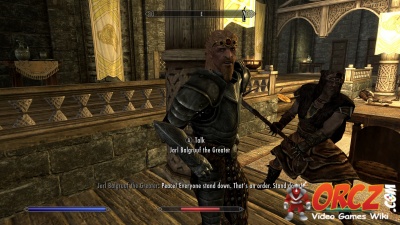 The Jarl will give the order to stand down at this point. Only when you hear him calling out should you stop attacking him. Vignar Gray-Mane will come into Dragonsreach. The two will talk and it is now a pleasant exchange. Balgruuf will address the Dragonborn and express his disappointment in them choosing to side with the Stormcloaks. You will be told to return to Windhelm to tell Ulfric Stormcloak of the Stormcloak victory. 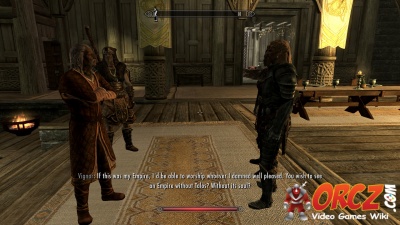 Ulfric Stormcloak is happy to hear the battle is over. You will be awarded an enchanted sword and gain the title "Ice-Veins". Now the next quest begins.