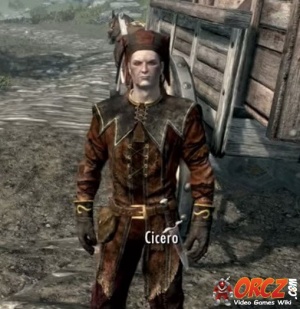 Cicero is an Imperial NPC in The Elder Scrolls V: Skyrim.

Cicero is a traveling Jester. He has the body of his mother and is bringing her somewhere to rest.

The reality is that Cicero is the Caretaker for the Night Mother's body. He started as another Assassin for the Dark Brotherhood but proved to be an accomplished assassin. He steadily made his way up the ranks to become the Caretaker for the Night Mother. Before he officially took the role, he was permitted one last assassination which involved a Jester. It is said that this Jester's laugh still haunts Cicero.

Cicero fled another chapter of the Dark Brotherhood as it deteriorated over a number of years. He is seeking the one who will be the Listener for the Night Mother. It has been years since one has shown up.