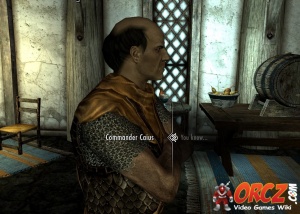 Commander Caius is an Imperial NPC in The Elder Scrolls V: Skyrim.

Commander Caius is the Captain of the Guard for Whiterun while it is under Imperial Control. He takes a lot of pride in his work. He will warn off outsiders and new visitors from mischief.

If the Stormcloaks take Whiterun through the Civil War quest line, he is replaced by Sinmir