Having completed your previous task, you are sent to the Rift Imperial Camp. Once there, you will need to report to Legate Rikke. She will tell you to head to Riften and into Mistveil Keep to find something on Anuriel.

Inside Riften, head through the town and to the keep.

Inside the keep, head to the South, past the throne. Go into the hallway behind it and follow it to the right. Start sneaking and go through the doorway here. If you want to steal things, look to the right from where you entered. You will find some gems: a Garnet, Sapphire and Ruby. There is also a display case (Adept lock) that you can pick. There are 3 necklaces in that case you can steal and fence.

After that, look into the dresser. In it you will find the Incriminating Letter. 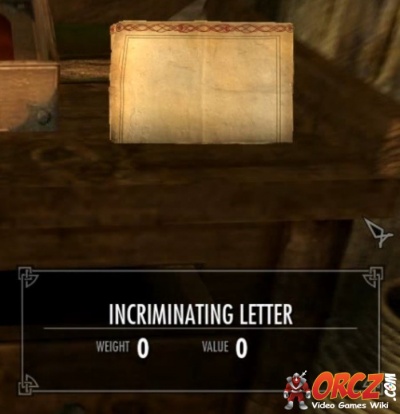 With this in hand, you will be able to confront Anuriel. Go back to the throne room. Talk to her and show her the letter. Anuriel will tell you to follow her. Stay within a short distance of her and you will have nothing to worry about.

Anuriel will lead you back to her room. There she will ask what you want for this letter, choose any response and then What kind of agreement did you have in mind?. She will mention a large shipment of gold and weapons. You can prompt her to continue to learn more about it directly, ask how munch is in it or just accept the deal. Asking how much or prompting her to continue will allow you push for a bribe. Accepting the deal will begin the next portion of the quest.

With the information learned, make your way back to the Rift Imperial Camp. Find Legate Rikke who will be wandering the camp and tell her about what you have learned. She will tell you that they happen to have some men who were scouting the road. She wants you to meet up with them and help them take the shipment.

You will find the Imperial Scouts on a trail up from the main road. Talk with Hadvar to be presented the options for this ambush. You can go in solo, lead the assault by sneaking into the camp or just charging in with the soldiers. Make your choice and then start moving in.

If you are working with the soldiers, suggest waiting until night time. This makes it easier to sneak around. Follow them down the slope and toward the camp in a crouch. The squad will pause at a point in the descend. Follow them and look toward the trees to the North. While Hadvar will talk about the squad ambushing the Scout, it is on you to eliminate them. Just wait for them to come into view. Eliminate them or just fire an arrow when Hadvar gives the command.

If you are not working with Hadvar or have attacked the scout, this is the next part of the quest. Make your way into the camp and then it is time to start dealing with the Stormcloaks here. All of the Stormcloak Soldiers will be marked that are in the camp. Use your preferred means and start clearing them out. There are around 6 soldiers to start.

With the stormcloak soldiers killed off, return to Hadvar. He will tell you to return to the Imperial Camp to report your success and to have them send men as well as a new wagon. That will complete the mission.