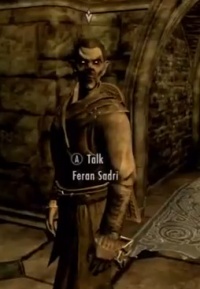 Deceiving the Herd is a side (Radiant) quest in Skyrim: Dawnguard. This is a repeatable quest.

Deceiving the Herd is only available to Vampire Lords.

Deceiving the Herd is given by Feran Sadri.

Feran Sadri wishes to sow confusion and anger amongst the people of (Random Hold Capital). I am to kill a citizen out in the streets while impersonating a member of the Dawnguard. Then I am to place an incriminating letter on the corpse. The higher the profile of my victim the better.

Kill someone out in the streets of (Random Hold Capital)

(Optional) Make it a public kill while wearing Dawnguard Armor

Plant the Incriminating Letter on the victim.

The Hold Capital you are assigned is random, could be Markarth, Dawnstar, Falkreath, Morthal, Riften, Solitude, Whiterun, Windhelm or Winterhold[1]

Go to the city you were assigned.

Find a High Profile Victim who could be someone attached to the Jarl's court, a merchant, a bard, a priest, or someone with stature

See here for a list of High Profile Targets: