You can begin “Diplomatic Immunity” after completing the quest “A Blade in the Dark”.

Head back to the Sleeping Giant Inn in Riverwood and talk with Delphine. Head into the Secret Room in the wardrobe and talk with her in there. She explains a member of the Thalmor, Elenwen,likes to throw parties for the rich and powerful. She has an agent on the inside, Malborn, who can help you get into the party and at least point you in the direction of the files. He will meet the Dragonborn in the Winking Skeever in Solitude.

Getting to Solitude can take some time. You can fast Travel to Ustengrav and then head to the Northwest from there to save some time at least. Head into Solitude. Once inside, if it is your first visit, the Roggvir's Execution event will trigger to your right. The Winking Skeever is inside ahead on the left. Once inside the Winking Skeever you will want to go to the left to reach the bar. Turn to the right after that and sit at the table nearby the cooking pot. You will find Malborn there.

Head over to the table and sit in the vacant chair. He will explain that he can smuggle in your equipment into the party. The next part depends on if you want to go Sneaking or just cut through everything. Give him potions, armor and your preferred weapons to start things off right. When you are certain you have given him the right things, double check that he is carrying the right items then exit the dialogue. He will get up a leave the tavern after telling you to head to Katla's Farm who has some appropriate attire for the party. Leave Solitude and make the short trip down to the marked farm.

Once there Delphine will give you Party Boots, Party Clothes and Invitation to Elenwen's Reception. Equip the Party attire and then talk with Delphine again. She will take the rest of your gear. After that things get sped forward and you are taken to the Thalmor Embassy.

Once there you will meet Razelan who is also late to the party. His excuse is that he got lost coming up the mountain. He will insist that you head in first. Go to the North and you will be stopped by a Thalmor Wizard. A Thalmor Soldier stands at the top of the stairs nearby the door. You can talk with him but it is better to just go inside. 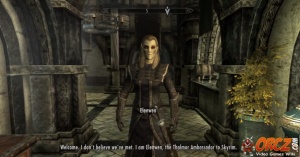 Once inside you are immediately greeted by Elenwen. She will have a few questions for you. Just be careful about how you answer them. Still, you can generally get away before her suspicions are raised. This is because Malborn has a question for her. Move over to Malborn yourself after that and talk with him to get the next part of the plan moving. He tells you that a distraction is needed for you to slip out of the room with him. 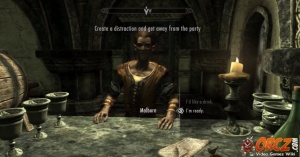 Once the distraction is caused, head for Malborn. He can be found in the Northern portion of the area. 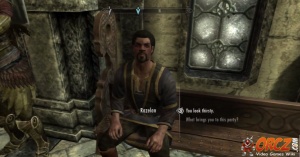 Razelan - Talk with him and he will agree to cause a disturbance if you get him something to drink. Talk with either Brelas or Malborn to get some Colovian Brandy. He will get up on a table and make a speech. As he is getting up you will want to head over to where Malborn is.

Jarl Idgrod Ravencrone - If you have earned her favor, she will help you.

Maven Black-Briar - If you have earned her favor, she will help you.

Jarl Balgruuf the Greater - If you have earned his favor, he will help you.

Orthus Endario - If you have earned his favor, he will help you.

Jarl Igmund - You can persuade him to aid you in causing a distraction if you are friends with him.

Jarl Elisif the Fair - She can be persuaded to help cause a distraction if you are friends with her.

Jarl Siddgeir - He can be persuaded if you are friends with him.

Ondolemar - Can be persuaded to help cause a distraction. This will make him your enemy hereafter though.

Vittoria Vici - While not a friend, can still be persuaded to help with a distraction. 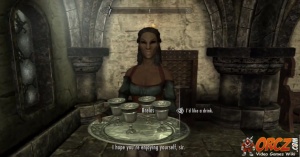 Look around the party for Erikur. Talk with him and offer to talk to Brelas on his behalf. Talk with her about an intimate affair with Erikur. She will refuse then you can go back to Erikur and tell him whatever you want. Either way you will get the scene you are after. 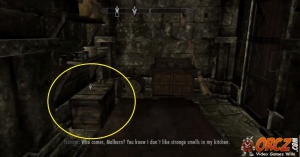 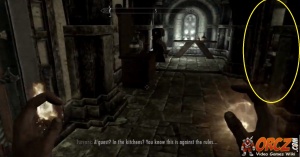 For an easier time, at least for Dark Elves and Wood Elves and a very easy time for High Elves, close the first door on the left then head to the first room on the right of the corridor you are in. In this room you will find a spare set of Thalmor Robes. Put them on make your life easier. For the human races, Nord, Breton or Redguard your sneaking gets a bit easier. For the bestial races: Khajiit, Argonian or Orc, you are still easily spotted.

Open the door and head through into the room on the left. Either walk by them {if your a High Elf in Thalmor Robes) or just wait for them to leave. Head on through to the West and go on outside. This will take you outside to the Embassy Courtyard. Start sneaking around the perimeter and avoid getting spotting. Either path here will lead to the Embassy Solar.

Once in the Solar, you have a few options. You can overhear Gissur arguing with the spymaster Rulindil about payment. They will mention an interrogation room in the bowels of the solar. You can slip up to Rulindil after the talk in the Northwest office on the upper floor. You can either backstab him or pickpocket him to get the Interrogation Chamber Key or find the Dragon Investigation document and 2 Dossier: on Delphine and Ulfic Stormcloak. You are technically done, but there is still a bit more you can do. Head on down the stairs into the Embassy Dungeon. It is behind a Expert lock so expect it to take a few tries unless you have the Key. 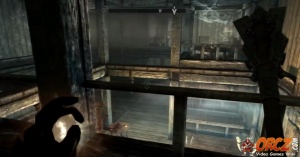 Once inside the Dungeon, there are only a few guards to concern yourself about. Kill them as you come across them to make your life easier. Just slip down the stairs and look to the right. You will find the report you are looking for. You will find another dossier on Esbern. Now head over to the first cell and talk with the man there: Etienne Rarnis. Nearby him can find Brelas, if you used her to create a distraction. When you release the prisoners, 2 Thalmor Soldiers appear with Malborn. Kill the guards to save Malborn then loot their bodies to find the key needed to access the Trap door. There is no other way out. This will take you to the Reeking Cave.

Head through the door opposite the chest with your gear. Turn through the door on the left. You will find a pair of Thalmor Soldiers. Kill them then deal with the Thalmor Wizard who is likely drawn in by the sounds of the fight. Go to the West and head outside through the door. You are now in the Embassy Courtyard. Once again you have a pair of Thalmor Soldiers to deal with. Along with them there are a few Thalmor Wizards after you. Kill them all then find Elewen's Solar. Head inside.

Once inside the Solar you can overhear Gissur arguing with the spymaster Rulindil. Attack the wandering Soldier to start the battle. Kill off Gissur and Rulindil when they attack you. Kill them and loot their bodies for a number of useful items. Rulindil is particularly important as he has the Interrogation Chamber Key. Head upstairs and search the Northwest office to find the 2 dossiers on Delphine and Ulfic Stormcloak as well as the document on his investigation into the dragon's return. Now head down to the marker in the lower portion of the solar. This will lead you into the Thalor Embassy Dungeon. This sits behind an Expert Lock. Without the Interrogation Room Key, expect it to take a lot tries.

Once inside the Dungeon, there are only a few guards to concern yourself about. Kill them as you come across them to make your life easier. Just slip down the stairs and look to the right. You will find the report you are looking for. You will find another dossier on Esbern. Now head over to the first cell and talk with the man there: Etienne Rarnis. Nearby him can find Brelas, if you used her to create a distraction. When you release the prisoners, 2 Thalmor Soldiers appear with Malborn. Kill them, saving Malborn and getting the Trap door key. Now you need to find the Trap door. Head on through here to reach the Reeking Cave. 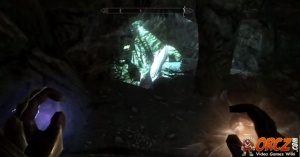 Inside the Reeking Cave you have your work cut out for you. You need to kill a Frost Troll preferably without Malborn or the other NPCs dying. The best tactic is to attack from the ledge you arrive on as the Troll can't strike back at you. This is only a small cave. After the fight just make your way to the exit. Watch the others run off then head for Riverwood. Go into the secret room inside the Sleeping Giant Inn to talk with Delphine. She will tell you more about the old Nord you've learned about and let you start the next quest: