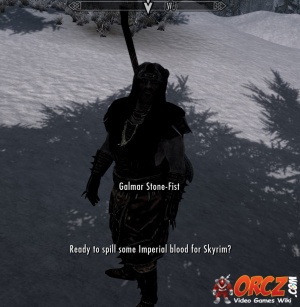 Galmar Stone-Fist is a Nord NPC in The Elder Scrolls V: Skyrim.

Galmar Stone-Fist is the right-hand man of Ulfric Stormcloak. He is a general in the Stormcloak uprising. In his youth, he fought with Uflric and Rikke under the Imperial banner.

When the Empire surrendered to the Aldmari Dominion, he was furious. He knew an Empire that would not surrender and expects as much from them. He has no love for any Imperial or any member of the Thalmor.