First, talk with Nazir before you leave the Sanctuary to complete this contract. He will decided that it is best to move into the Dawnstar Sanctuary and set up there. Now it is time to head to Whiterun to meet with Amaund Motierre once again.

Head to Whiterun and go inside the Bannered Mare. You will find Amaund Motierre in the back room. Just go straight and into the room in the back of the Mare. Turn to the left inside to find your contact. Talk with him to learn the location of the Real Emperor Titus Mede II. He will explain that the boat is the Katariah, moored just off from Solitude. However, he will explain that the ship is due to depart very soon and the window of opportunity to kill the Emperor will close with it.

Fast Travel to either Solitude or the East Empire Company Warehouse. If you travel to the Warehouse, you will be nearby the ship and able to complete one of the optional objectives. Commander Maro is waiting on the docks nearby the ship.

You can easily take out Commander Maro. He is standing on the pier just outside the East Empire Company Warehouse. If you approach and talk with Commander Maro, he will be very surprised that you are alive. Kill him from some cover to avoid incurring a bounty. After that, it is time to strike at your true target, the Emperor.

Swim out to the Katariah. Go to the front right side of its hull. You will find an Anchor Port that you can use to get inside the ship itself.

Once inside you have a lot of sneaking to do. There is a pair Sailors in the cargo hold that you emerge into. Take them out and head to the South. Go up the short set of stairs and turn to the West. Look into the bunk and there is another Sailor pacing about in there. Take him out then turn to the South and start down the corridor in front of you. Look ahead of you for the next room. Another sailor is in the room in front of you. Take him out quietly. There is a Penitus Oculatus Agent in the room to the West of this one. Eliminate them then continue over to the Northwestern part of the ship and take the stairs there upward. Next, go to the nearby door. It is locked (Expert Level).

To find the Captain, turn to the South from the door. You will find a pair of Penitus Oculatus Agents talking across the way. Snipe them if you can or sneak in and take them down stealthily. Go into the corridor just to the South of them. Turn to the West and open the door there. Just inside is Captain Avidius. Eliminate him and then you can get the Katariah Master Key. Return to the locked door and open it up.

Head through and look to the West. In this room is another Penitus Oculatus Agent who is getting up. You can either ignore him or kill him. Turn to the East and look through the door there to find the next pair of Agents. Again, either ignore them or kill them. Continue down the hallway to the North. Go to the end of the hallway.

If you open the Northern door at the end of this Hallway, you will find Lieutenant Salvarus. He can also be killed for his armor and presents another chance at the Katariah Master Key

After that, head up either set of stairs. Go through the Southern door on this upper level. This will lead you onto the deck of the the Katariah. Take some time to either sneak across the deck from where you are to the bow of the ship.

Go to the Bowsprit, the slanted mast on the Ship's front. This is because the unique sword: Windshear can be found there. With it in hand, it is time to continue on and complete the contract.

Head to the North and open the door to get back below deck. Just head through the door to the North, to enter the Emperor's Quarters. The door is locked (Master level) but can easily be opened with the Katariah Master Key. This will lead you directly to your target. 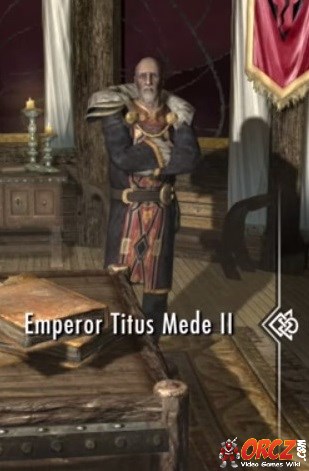 The Emperor will explain that he has been expecting you. He will also make a request that you, after you have been paid, kill the person responsible for setting this scheme in motion. AFter that, he will look out the window and wait for the Dragonborn to complete the contract. Do so.

Once you have killed the Emperor, you can loot his body and the room. If you look in the small room off to the side then you can find some unique items. The first is the Gilded Wristguards. The second is another set of Emperor's Robes. Grab that stuff then head out using the door that leads out to Skyrim in the Eastern wall.

Make your way back to Winterun. It is time to get paid (and potentially fulfill the request of the Emperor). Head back to the Back Room in the Bannered Mare. Talk with Amaund Motierre to learn the dead drop location. Now, you have the option of fulfilling the Emperor's request. You can kill Amaund and collect the money or just leave to collect the money. It is your call.

If you plan to kill Amaund, then talk with him first. Turn around quickly after that and close the door (If the door was previously closed, it will open automatically after the conversation with Amaund is complete). Then turn back to Amaund Motierre and kill him.

Make your way to the dead drop in Volunruud. Likely you will need to fight through the Draugr against because of respawn timing. Head down into the first chamber and turn to the left. Go through the door at the end of the corridor. There you will find the entrance to the chamber. Go Get to the chamber and claim the reward of 20,000 septims that awaits you there.

With the reward in hand, it is time to return to the Dawnstar Sanctuary. When you make it inside you will find Nazir waiting for you. He will ask how much you were paid. He is simply curious. After that, you just have this Sanctuary to rebuild and plenty of contracts to fulfill.

Where You Hang Your Enemies Head