Skyrim: In My Time of Need 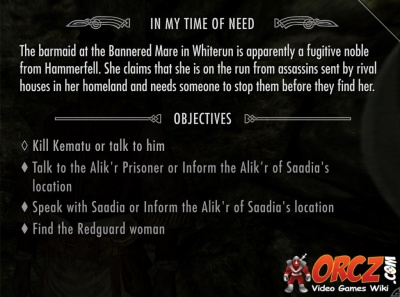 In My Time of Need in The Elder Scrolls V: Skyrim.

“In My Time of Need” is a Quest in The Elder Scrolls V: Skyrim

You get this quest for wandering around Whiterun. You will encounter a pair of Alik'r Warriors. They will explain that they are looking for a Reguard woman who is hiding somewhere in this city. Just talk with the Warriors to begin this quest.

To find the woman they are looking for, head for The Bannered Mare. Look for Saadia and talk with her. Tell her about the Alik'r and she will ask you to follow her. She will take you upstairs and into her room. She will then pull a knife on you. Tell her to calm down and she will start to explain heself. She was a noble woman who had to flee Hammerfell because she was outspoke against the Aldmeri Dominion. She will ask you to hunt down the leader of the Alik'r Warriors and dispatch them so she can keep up her cover.

Now you are given your first choice. You can head out to Rorikstead and tell the Alik'r Warriors there about Saadia. They will then thank you and go to capture Saadia with an ambush you help set up in front of the Whiterun Stables.

The second choice is to listen to Saadia. She will explain that the guards caught one of the Alik'r Warriors and have him in the local dungeon. Head up to Dragonsreach. Instead of going in through the front, head over to the right-hand side of the palace. This will give you access to the Dragonsreach Dungeon. Go inside and open up the gate in front of you. Talk with the Alik'r Warrior in the first cell. He will explain that he just wants to get out of the dungeon. He will tell you whatever you can to know if you can get him free. Go to any of the Guards in the area and tell them you want to pay that Prisoner's fine (100 gold). After that, talk with the Alik'r again. He will explain that Kematu and company are hiding in the cave: Swindler's Den.

Head on out to Swindler's Den, located to the West of Whiterun.

Outside the Den you will find a flag flying and at least 1 Bandit waiting as guard. Defeat them. To the left of the entrance of the Den is a Sleeping Roll you can use. To the right of it you can find 4 helmets: Iron Helmet, Imperial Light Helmet, Hide Helmet and Steel Helmet

Head down the entry way. You will encounter a pair of Bandits who are discussing the current events. You can find a number of things inside this room after you have dealt with those Bandits. There are 2 clusters of White Caps to be found in one corner of the room. Opposite that, on a raised area, is a chest you can loot.

Go to the East to get into the next room. You will find another pair of Bandits patrolling around in here. Pick them off or just fight them both at once. In this room you can get some Charred Skeever Hide, there are a few Bed Rolls you can rest in as well. If you look around the fire pit you will find some Firewood and a Woodcutter's Axe. Go to the left from there to find a crate with a satchel and a stamina potion on it. Now head deeper into the den.

In the next room there are at least 5 Bandits you will need to deal with. There are 4 on the lower level, most of them melee with at least one using a bow. On the ledge above them you have a mage bandit who will be firing off Shock spells against you. Fight from the hallway leading in if you are having a lot of trouble. Take a little time to search the room when you can. You can find a bit of food scattered around the middle of the room. You can also find a Deer Hide sitting near the entrance to the upper portion of this room. Head on through the opening to the North to continue moving forward.

There will be either 1 or 2 Bandits to deal with in this part of the room. Again, use the entrance to bottle neck them and make the fight a bit easier. When you have dealt with them, there are a few things of note here. There are more bed rolls for you to rest on. On one of the bed rolls is the skill book: Thief. Read it if you haven't yet for the boost. There is also a Deer Hide on the table nearby with a chest next to it. Loot them both then turn to the West . Just to the left of the passage out of this room is a box on a rock shelf. Look inside to find some Refined Malachite and a Silver Ingot. Now sneak out that way. You will be on the ledge above the area you were in earlier. There is the Mage bandit to deal with now. Just charge in or pick him out from cover. Defeat him and look on the platform to the North. You will find another Deer Hide. Grab it then turn to the South and through the next passage. Be careful entering this area as there are 2 bear traps sitting on the ground.

In the water-filled back room you will find Kematu and his 6 Alik'r Warriors. All of them are equipped with Scimitars. Kematu is the only one is equipped with 2 Scimitars. If you are in the final stages of In My Time of Need then you will hear the warriors be called off (even if you are in werewolf form). Kematu will ask you to talk with him. Otherwise, you will just need to fight through them all. Either way, there is a large chest at the top of the ramp beyond the waterfall on the right-hand side. Loot it as it is a boss chest.

If you opt to side with Saadia, or are just passing through, then Kematu and Alik'r Warriors attack. It helps a lot to use the spell Mayhem or just be ready to take on a lot of opponents at once. Back up into the corridor you came through it a good idea. If you can transform in a Werewolf or Vampire, that will help a good amount with the boosts.

Either way, head down the passage at the top of the ramp. Along the way, look on the right-hand wall to find a Iron Ore Vein. Mine it and then you are done with the area. Just head outside, to the left from where you drop down.

In the water-filled back room you will find Kematu and his 6 Alik'r Warriors. All of them are equipped with Scimitars. Kematu is the only one is equipped with 2 Scimitars. If you are in the final stages of In My Time of Need then after you deal with some of the Alik'r Warriors. Kematu will call them off and then ask you to talk with him. He will explain that Saadia is a traitor to Hammerfell. She, allegedly, sold them out to the Aldmeri Dominion. They have been sent to retrieve her and bring her back to Hammerfell.

If you opt to side with Saadia, then Kematu and Alik'r Warriors attack. It helps a lot to use the spell Mayhem or just be ready to take on a lot of opponents at once. Back up into the corridor you came through it a good idea. Defeat all of them then head back outside. Return to The Bannered Mare in Whiterun. Report Kematu's death to Saadia and she will reward you.

If you side with Kematu, he will ask you to help ambush Saadia. He will tell you to lure her to the Whiterun Stables. Just go to the Bannered Mare. Head to the Tavern and talk with Saadia. Ask her to follow you. She will. Lead her out to the stables. Kematu will surprise her then quickly cast a spell on her to hold her. Talk with him when things are resolved and you will complete the quest.