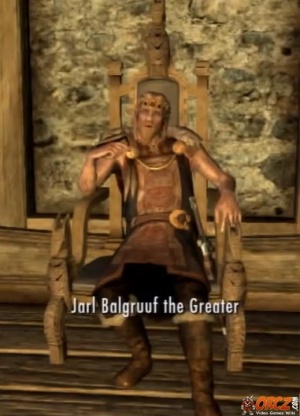 Jarl Balgruuf the Greater is a NPC in Skyrim.

Jarl Balgruuf the Greater is the Jarl of Whiterun. While he does become loyal to the Empire, the Jarl put the needs of Whiterun and her people first. He has denied the Imperial Legion permission to garrison troops inside the city. He will generally respond that he is on Whiterun's side in regards to the Civil War.

He can normally be found in the Throne room of Dragonsreach.

The Way of the Voice