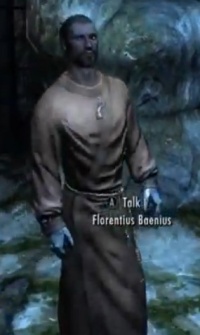 Florentius Baenius. Talk to him after recruiting him to the Dawnguards, to start the quest "Lost Relic", in Skryim: Dawnguard

Lost Relic is a side quest in Skyrim: Dawnguard.

It is only available to Dawnguards.

Lost Relic is given by Florentius Baenius.

Florentius Baenius has sent me to retrieve the Dawnguard Rune Hammer from Greywater Gorge.

From Greywater Gorge (or other Radiant location chosen at random).

Artifact type and location will vary. Go to the dungeon specified and you should find the artifact in a chest at the end of the dungeon[1]

Return to Florentius in Fort Dawnguard.

You get to keep the artifact you found.