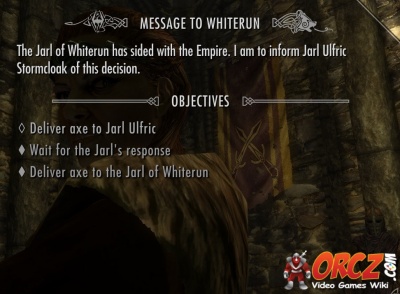 Message for Whiterun in The Elder Scrolls V: Skyrim.

“Message to Whiterun” is a Stormcloak/Imperial Civil War Quest in The Elder Scrolls V: Skyrim

Having brought the Jagged Crown back to Ulfric Stormcloak it is time to start dealing with the matter of business: Whiterun. Ulfric needs an answer and he hopes that Whiterun will side with him. This will avoid a big fight and help keep the Nords strong for the real battle of pushing out the Empire. Ulfric will talk with Galmar Stone-Fist and then decide to send you to Whiterun with his Axe. He will explain that no words are needed and that the axe will give him all the answers that he needs. 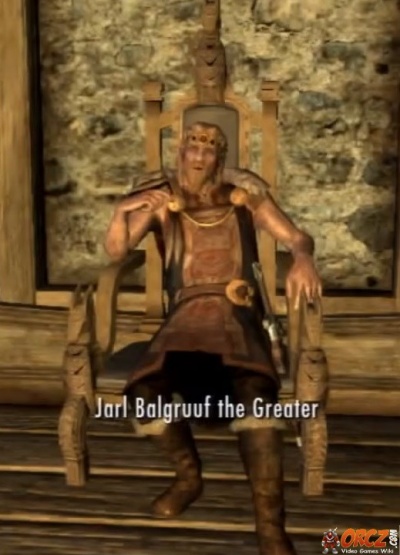 Leave the Palace of the Kings and fast travel to Dragonsreach. Head into the main room and talk with Balgruuf the Greater. Balgruuf will call on Proventus Avenicci and Irileth. They will discuss things and then Bulgruuf will come to his decision. He might not like the Imperial policy but he will accept their help to spare his town. He will then ask the Dragonborn to bring the Axe back to Ulfric Stormcloak.

Return to Windhelm and seek out Ulfric. Ulfric is saddened by this turn of events. Galmar Stone-Fist is happy about this turn and begins the final preparations to move the Stormcloak army over to Whiterun to begin the battle.

Whiterun will be under siege until the completion of Battle for Whiterun. This cuts off a lot of the shops and other valuable services until the next mission is completed.